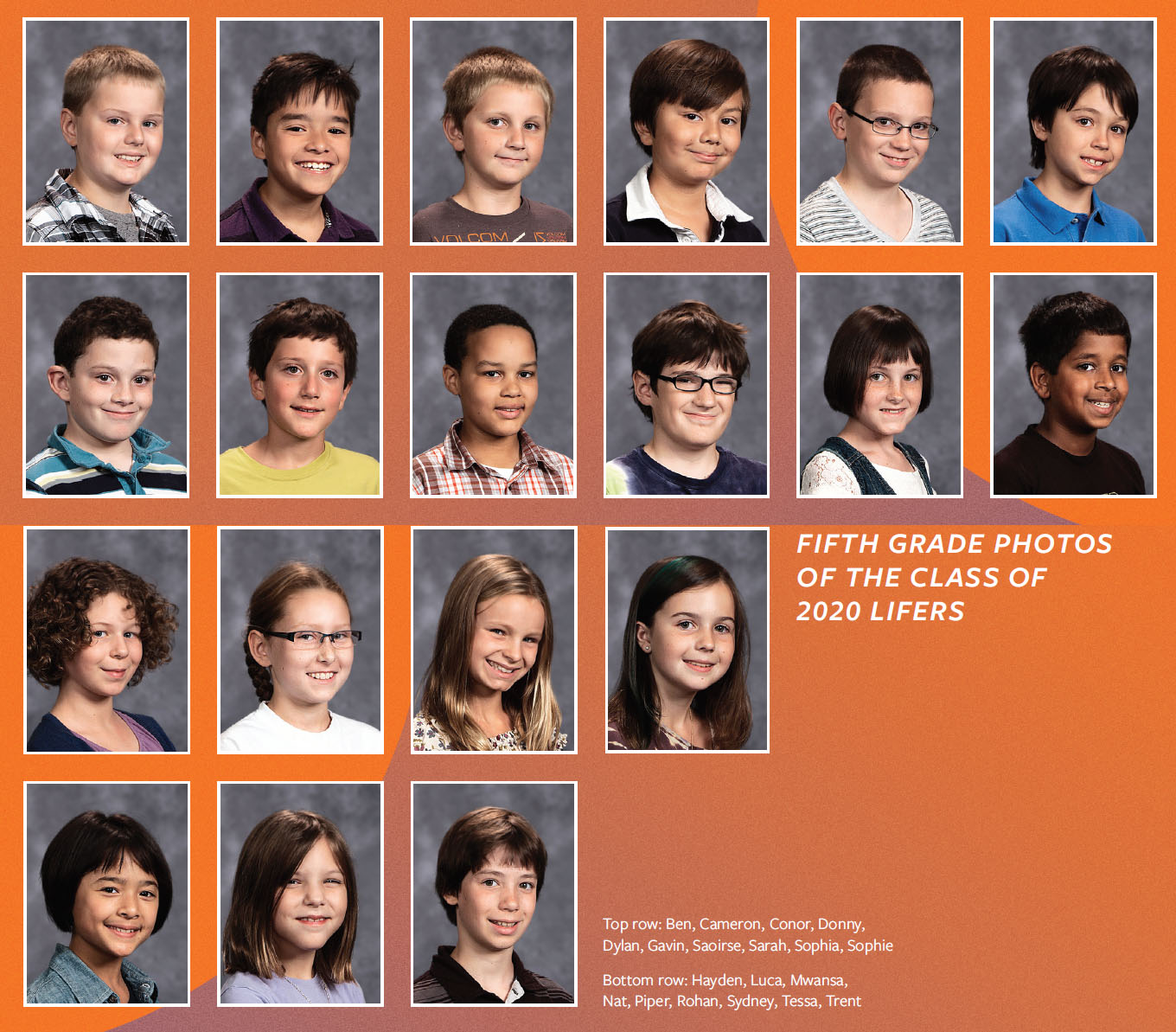 A CURRICULUM THAT BUILDS RELATIONSHIPS FROM FIFTH TO TWELFTH GRADE

A CONVERSATION WITH EPS LIFERS: MEMBERS OF THE CLASS OF 2020 WHO STARTED AT EPS IN FIFTH GRADE

LIFERS LOVE THEIR MEMORIES OF THEIR FIRST FEW DAYS, months, and years at Eastside Prep. They remember feeling immediately like EPS was a second home—even in the office of the Head of School! “Dr. Macaluso was very welcoming. My friends and I would go into her office at lunch,” remembers Saoirse Landers. “She had decorations out but it all looked like toys to us, and she let us play with them even if it would leave her office messy.”

Hayden Press also remembers “how friendly and welcoming everyone was—students, faculty, everyone was kind and inviting.” And, of course, it was fun to move into a Middle School environment with more freedom—both in the way they walked around campus and in how they chose their classes and designed their own education. “While for elementary school I was supervised everywhere, EPS granted me the freedom to manage my time and classes myself,” says Gavin Uberti. “I enjoyed the freedom and responsibilities,” says Sophie Voskuil. “I also loved the small class size that allowed us to get to know each other and become close friends.” Luca Chierotti remembers less homework while Dylan Gilbert remembers loving the “different learning atmosphere.” They could all feel it. They all flourished in it.

EPS Lifers don’t just talk about teachers, they talk about their relationships with their teachers. “Even when I wasn’t in Guided Study Hall anymore, the Learning Support folks were a wonderful part of my Upper School career,” says Sydney Hallwoman. “I can’t count how many times I would just barge into ‘Manderson’s’ office upset and I would walk out laughing.” Chierotti says taking a variety of classes in a variety of subjects has allowed him to meet almost every teacher at EPS, which he loves. “Mr. Fierce has helped me tremendously in Upper School,” says Sophia Glover, “not only with my coursework, but also as a great teacher to talk to.” Rohan Bharadwaj adds, “My favorite thing about senior year is the more mature and friendly conversations with teachers…making ideas much easier to share.”

The support of the EPS community didn’t stop when classes got out. “I love how supportive everyone was throughout the college process,” says Hallwoman. “I was worried that there would be a lot of competition, but everyone just seemed genuinely happy for each other.” Others found senior year more stressful, but still enjoyed the time they spent with their classmates. Both Piper Danis and Ben Serdy talked about how much fun homecoming was after spending so many years getting to know each other and building real relationships. Tessa Martinez says that throughout senior year, “I’ve been connecting with people in a way that I haven’t before.”

Senior year, in many ways, is a lot like that first fifth grade they loved so much. They still enjoy choosing classes and have even more freedom now. “I really enjoyed the opportunities given to me through multiple independent studies,” says Trent Bohan. Donny Sanders agrees, “It’s been really fun to pick the topics I want to learn about.” Voskuil is appreciative of the encouragement during a sometimes stressful time: “Throughout college applications, EPS has offered a lot of support to the seniors.” And the seniors are there for each other as well. When asked about his favorite part of this year, Uberti responded simply, “my peers.”

In addition to some academic freedom, they’ve loved the connections the EPS curriculum has encouraged them to make. “Last year the history units in eleventh and seventh grades were aligned so we were learning about redlining at the same time,” says Landers. She remembers getting to visit the seventh graders for a joint lesson. They worked in small groups to create and manipulate maps, and then, when the lesson was over, “we had a snowball fight with crumpled paper outside the TALI.” She sums the whole period up as “chaotic, fun, and memorable.”

“I went on a trip to New York City in eighth grade,” says Sanders. “I didn’t have that many friends on that trip, but that was a blessing in disguise. I befriended some of the closest friends I have now at EPS on that trip.”

Sometimes EPS helps its students build other connections as well. “I remember in history class I built a crossbow with my dad, and it was probably my most memorable project that showed me I could have fun while learning,” says Conor Moore.

Sarah Hallman-Luhn sums up a feeling a lot of seniors seem to share. “I think I have the opposite of senioritis. More than ever before, I have been able to engage in and enjoy each and every one of my classes.” 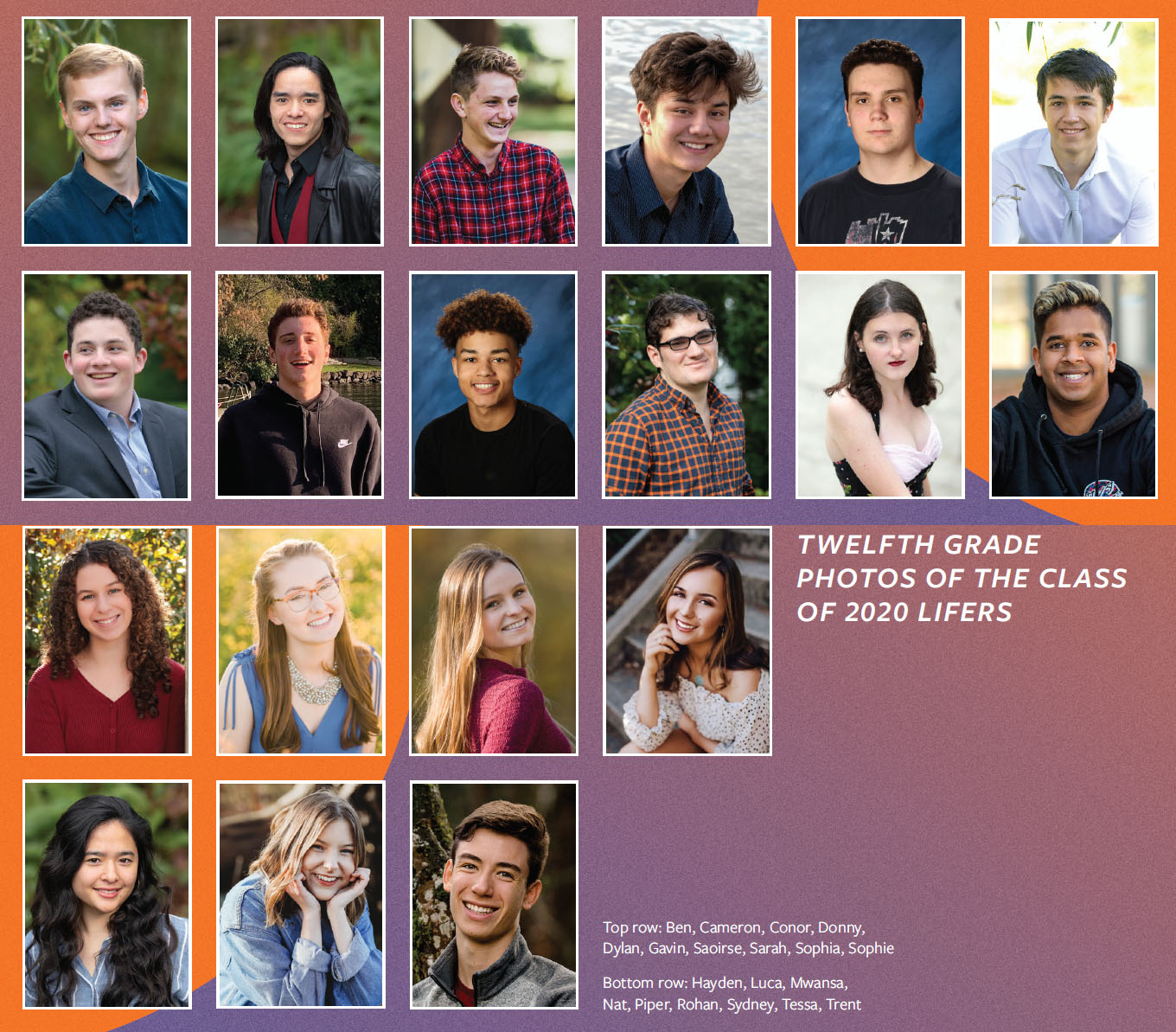 BUT IT’S NOT JUST THE CLASSES

Another theme of EPS Lifers was just how much they got to experience while they were here. Few of them talk about being “athletes” or “theatre kids.” Instead, each of them enjoyed diverse experiences. Press talks about how much he loved playing soccer and Ultimate, but adds, “I wouldn’t say that my involvement in sports is any greater than my involvement in other activities.” Nat Maymudes noticed how, now that he’s a senior, he brings more interdisciplinary connections into the classroom. “Teachers are more open to ideas I have that connect to theatre, sports, and songs.” Like the school, Maymudes himself is interdisciplinary. He competes in cross-country, but also runs the scoreboard for sports; he performs on stage, but also loves to work backstage.

Getting involved in extracurricular activities was for some of them, their favorite memory from their early years. Cameron Auyang Hallman loved being in Once Upon a Mattress during fifth grade. For his favorite activity he says, “I think I have to go with chamber choir. If something makes me want to wake up an hour early for school, you know it’s gotta be good.” Bohan loved his time with Student Government and Student Leadership Council (SLC). Moore is involved in SLC, Suicide Prevention, Peer Mentoring, MLK day planning committee, Ultimate, as well as other clubs.

Danis remembers performing ‘One Day More’ with the EPS chamber choir during her junior year. “We were getting ready to say goodbye to the seniors who were heavily involved in theatre and music. It was kind of bittersweet, but singing the piece with choreography and a lot of really unique staging made it special and exciting.”

Of course, one of the hallmarks of EPS activities is starting from scratch. Hallwoman loved the Mixtape Club, but unfortunately there wasn’t enough interest. But wisely innovating, it turned into a board game club, which she describes as “pretty epic.”

Martinez, who competes in cross-country and track, made a lot of friends on those teams. “I encourage everyone at EPS to join a sports team, because although it may seem intimidating at first, it is actually incredibly enjoyable and helps you meet new people.”

Sometimes, that involvement isn’t even during the school year. “I’ve been most involved in the Tech Internships during my Upper School summers,” says Gilbert.

Of course, there was time for silliness, too. Moore looks back fondly on all the times he bet Middle School Head Sam Uzwack who would win the Ducks vs. Huskies game and then got to watch Uzwack walk around school the next day covered in a Ducks blanket and other ridiculous gear.

And while it probably wasn’t funny for many, Martinez laughs at the time a student hit the sprinklers and accidentally flooded a building during finals week.

Glover remembers a random moment from Middle School when a flash mob developed during the lunch period. “To this day, I remember how much fun it was and how much excitement it added to the day.”

Of course, sometimes the fun needs to be reined in. “In tenth grade, we were allowed to listen to music during labs,” says Landers. “Unfortunately, my partner and I liked to sing along and dance. After too many broken flasks and beakers, we weren’t allowed to have music anymore.”

HEADING INTO THE FUTURE READY TO CREATE A BETTER WORLD

“I truly believe that EPS has taught me how to create a better world,” says Maymudes. “We have discussions, meetings, and assemblies on topics that are tough to talk about, but are essential in creating a better world.” That kind of honest conversation was an important part of EPS for many of our Lifers.

“One of my most memorable experiences at EPS was a peer mentoring retreat,” remembers Martinez, “where we did an activity called ‘if you really know me.’ We discussed struggles that we had, and I learned about everyone from a new perspective, which had a huge impact on me.”

“I believe EPS has shown me what it means to be a compassionate member of our society,” says Moore. Hallman-Luhn agrees that EPS has taught her how to embrace “the true meaning of compassion and empathy.” She says “it is our job to make the world a better place, to be there for others. Through studies of social sciences, clubs involving inclusion and diversity, and student involvement in suicide prevention training and awareness, I think that EPS sends students into the world with the knowledge and understanding of what being a genuinely good person means.” Voskuil adds, “EPS teaches students to be innovative free thinkers. In encouraging us to be ourselves and pursue our passions, EPS is paving the way for students to create a better world for themselves and others.”

Others are less sure. Hallwoman says she knows “they tried,” but in the end, she thinks “they’ve made me skeptical.” But maybe making space for that skepticism is part of the point? Serdy says that by asking students to take control over their own education and make their own decisions, EPS gets students to be more engaged, which will hopefully transfer to being more invested in the world they will be part of in the future.

“EPS has helped me discover what I love doing,” says Hallman, poignantly. “It’s difficult to create a better world if you don’t enjoy doing so.”

“EPS has taught me how to create a better world because it has provided me a tight-knit community where I have learned how to work well with others and be a leader,” says Mwansa Luchembe.

The Lifers of 2020 are not without goals for the future. These run the gamut from being a dentist and owning a cat (Landers), taking a gap year and meeting Richard Branson (Glover), becoming involved in her community and making music (Hallwoman), pursuing clinical and research oncology (Moore), and dunking on a ten-foot hoop (Luchembe).

Hallman-Luhn wants to be an educator, a dream inspired by her EPS teachers. Danis wants to “take things one day at a time and figure it out that way.”

Many are already thinking about others when they think about their own future. Bohan wants to find a career where he knows he’s helping people and Hallman wants to “be happy and help others when I can.” Martinez wants to be a leader and wants to make sure she’s helping others as she does so. “I always want to make sure that everyone feels accepted, and I have aimed to do this at school whether that be in Peer Mentoring or as a cross-country captain.”

Press says he has a lot of goals and it’s hard to talk about just one. If he has to, he wants “to do some good in the world, and make someone’s day.”