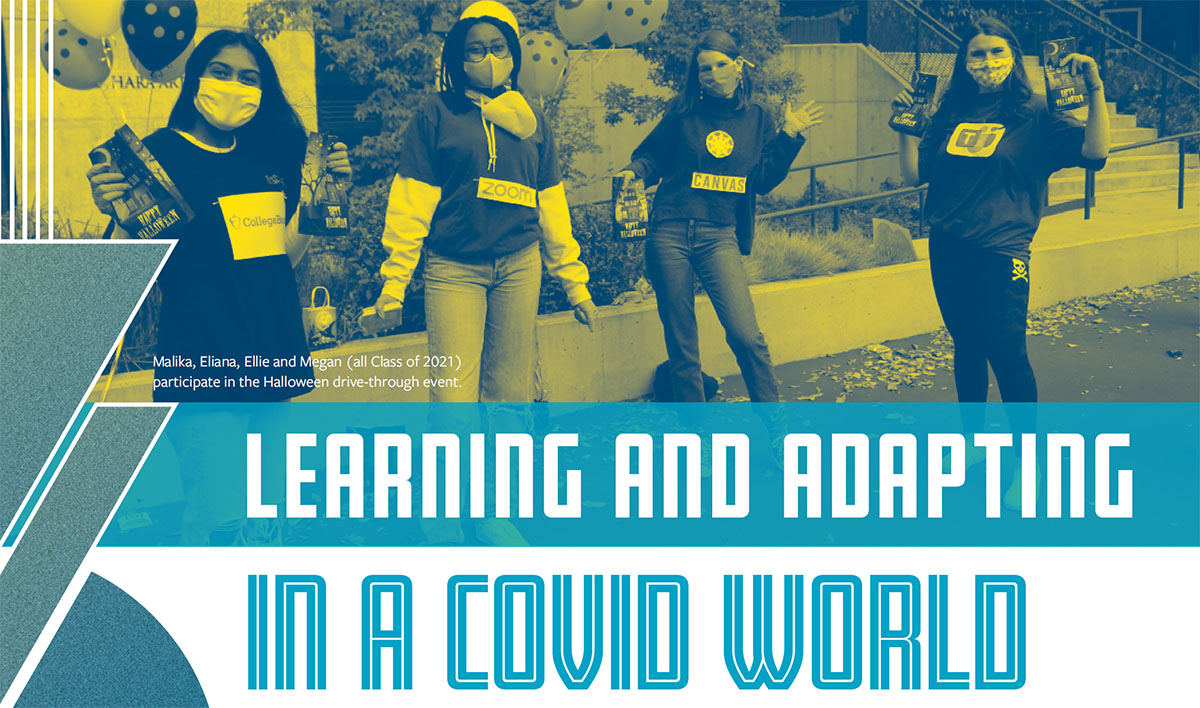 I spoke to Eastside Prep studnets while still in fully remote learning. When asked about the impact of online learning, the ways they are adapting, and what they’ve learned about being resilient, there was a surprisingly consistent thread throughout their responses: they all miss the hallways.

Those campus corridors might have stood silent for much of the last year, but their energy still lights up the students. “I took for granted the small interactions with people during lunch or while passing people in the hallways when we had in-person school,” says Emerson (Class of 2024).  “In remote school, it can feel like I only really talk to my closer friends.”

Hallway interactions weren’t just for fun, though. They were part of the education. Several students said how often they would chat with teachers because they ran into them walking to another class. Problems were solved, questions answered, relationships cemented. Jackie (’22) says she had to adjust to more formal emails and office hours, instead of “just seeing teachers in the hallways.”

The hallways had another advantage, too. They were real. “The only real part now is the work,” Sadie (’23) says. It makes it hard to stay motivated, another thing most of the students brought up. “We can’t express emotions over our computers,” says Isabella (’26), “which makes it difficult  to be motivated in online school.” She says her family and friends, as well as her two dogs, Wolf and Cooper, have helped her get through the year. Kendall (’23) has been enjoying the extra time with her sister.

With less interaction and more time, “it was hard not to procrastinate,” says Annalise (’22). “In person you have more accountability,” agrees Xavier (’22), “not only from your teachers but also your friends, pushing you from behind, sharing notes or ideas in the hallways.” (There are those
hallways again!)

But the students are showing resilience. Nina (’24) has had to learn how to focus even when she might not want to. “It’s just a matter of realizing what you will gain and lose from this experience when it is all over!”

Xavier says students still try to help each other. “We formed study groups with Discord servers, so we can still try to get everyone through this together.”

“We also use group calls to play games, share stories, and talk about homework,” says Emerson. “We use our passing period to hang out,” adds Alexander (’22). Joey (’26) agrees friends are getting him though. “When I reached out to a friend I hadn’t talked to in a while, it really made me feel good.”

In this way and so many more, students have adapted. Annalise tries to get her work done earlier in the day. Jackie sets a daily schedule to follow. Nina uses a new note-taking pad to organize events, objectives, and thoughts. It helps take the stress off to know everything is in one place.   “It’s also super satisfying to cross things off!” she says. Xavier enjoys quiet walks and finds creative ways to see his friends. Siddharth (’23) has started a daily routine of heading out for a jog or walk every day at 4 PM. “Resilience means being adaptive,” he says, a sentiment most students agreed with.

But being resilient isn’t a thing you do alone, and the students love everything that EPS has done to support them, from online clubs and passing periods for breaks and socializing to shorter class periods and later start times. But a lot of the help they get in adapting to this new life comes informally, from interactions with their teachers during or after classes or in little texted notes, informal just like they were back on campus, passing each other in the hallways.