EASTSIDE PREP DOESN’T JUST send students into the world, it sends them out to change the world. When we asked one EPS graduate, Victoria Silver (Class of 2011), why it’s important to help create a better world, she said simply: “Because not enough people are asking that question.”

In this article, we highlight a few of our alums who are actively involved in making the world a better place. 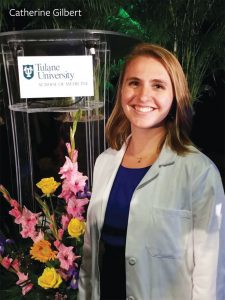 When Catherine Gilbert graduated from Wheaton College in Boston in 2015, she wondered what her next step would be. Like many college grads, she considered the whole world. Should she go back to her hometown? Move far away? Try to find sixteen friends to split Boston rental costs? Serendipitously, her brother had just been accepted to residency at the University of Kansas, and he and his wife had some extra space. Gilbert moved in with them, getting the best of both worlds—the freedom of a new place and the support of family—while she tried out the medical field as a scribe.

Even though she wasn’t geographically close to EPS, she never left the community. “I got some advice from Electra Korn (EPS Class of 2011) when I was applying to medical schools, and then I gave Sarah Krawczak (EPS Class of 2012) a bunch of advice when she applied.”

Now in her third year of medical school at Tulane, Gilbert is eyeing ophthalmology for her long-term career. “I think the pathology of the eye is interesting. The surgeries require the most intricate work,” explains Gilbert.

Even as a student, Gilbert has found time to work to improve the world around her. She often works at a free clinic called Luke’s House, where she spent a year running the ophthalmology clinic. “Privileged or well-off people can get treatment when they get a cataract, but the people who came to this clinic hadn’t been able to get help for so long. I really enjoyed being able to do something that was impacting the community.”

Gilbert uses her Eastside Prep Spanish, albeit in a slightly rusty state, in many appointments with patients, and she’s hoping to study more. “I like taking that extra time to explain things to patients. That’s something I feel very strongly about—patient education and making sure people understand what’s going on with them.” When needed, there is always an interpreter hotline; though, Gilbert notes that it’s hard to translate emotion over the phone.

Gilbert also betters the world with music. Perhaps not surprising given the location of Tulane, each med school class has its own band, which she helps organize for her year. “We play twice a year at different bars around New Orleans,” Gilbert says, and each gig raises money for a different fund. 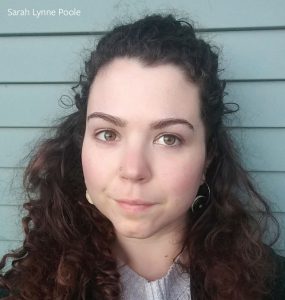 Sarah Lynne Poole only has a few months left in graduate school at Seattle University, where she’s pursuing a master’s degree in Social Work. She seems to have a knack for attending schools in their early years: this is only the fourth year this program has existed at Seattle U, so she’s a trailblazing student yet again.

Her program specifically focuses on clinical issues and the microenvironment of working with individuals (as opposed to focusing on the broader issues of policy). Poole came to this program after earning a degree in Psychology and Studio Art at Lewis & Clark. She says a lot of high school was harder than college. In her cohort of graduate students, she’s known as the person with all the good questions. She says, “EPS taught me how to ask questions!”

As part of her graduate degree, Poole has worked with both children and adults, and in a variety of settings from schools to Harborview, the largest trauma center in the Pacific Northwest. “I learn so much about all the people I see around me in my community every day.”

Poole lets her clients drive the goals. “I start by asking my clients what they want for themselves. With kids, I can help them explore options and find what they want.” She finds the job both rewarding and mentally taxing, some conversations hard to forget.

In her free time, Poole continues to work on her art. She draws and paints, cooks, practices yoga and pilates, and works with weights. She sees an energy worker and a therapist and is actively focusing on strengthening her body and mind together. “There are certain things I need to do for my own self-care so that I can be there for my clients,” she says.

One practice she’s begun recently is a reflective practice where she considers her day, looking for “the rosebud and the thorn.” She writes down these highlights and challenges along with the things she is grateful for and looking forward to. “I think it’s important to share that I took a year and a half off for mental health,” says Poole. She hopes others see her example and know that taking care of yourself is a necessary and important part of being able to take care of others. 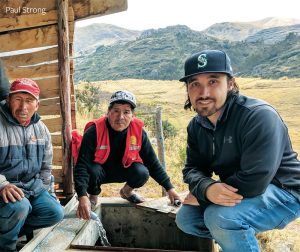 “I graduated in the ‘guinea pig’ class of 2009,” says Paul Strong, who majored in mechanical engineering at Arizona State. Why Arizona? He was excited to play rec-league baseball in the sun! During one of his engineering courses, he and a group of friends launched a nonprofit called 33 Buckets. “We wanted to provide sustainable access to clean water around the world,” says Strong. He describes the experience as the hardest thing he’s ever done, but completely worth it. “I met with community water managers in Peru over a traditional Incan meal, led engineering teams back home, and made Shark Tank-style pitches to funders.” He has stepped back recently, serving on the Board of Directors while leaving the full-time work to the civil engineers and people in Peru.

“Thinking back to high school, I was super shy and not all that confident in myself.” The nonprofit work forced him outside of his comfort zone. “It wasn’t easy to travel to other countries with different cultures and languages, he says, “often alone and not even knowing where our future funding would come from.”

Strong recently went back to business school at ASU, and he hopes to use his new skills to bring the “people over profits” approach wherever he ends up. When asked about what he misses about EPS, he says basketball. “I’m short, but what I lacked in size, I made up for with a terrible jump shot and no ball handling skills.” But there was something fun about facing the tough odds as a team and he definitely had hustle. “We did come away with some wins, including two on buzzer-beating three-pointers!”

In his free time, Strong volunteers with his church and mentors student teams in the same ASU course where he developed his nonprofit. “It makes me feel old saying this, but helping the next generation is super rewarding.”

He also loves traveling and trying new food. “Probably the most different meals I’ve had were the traditional roasted guinea pig and huatia potatoes (cooked by covering in hot stones and dirt!) in rural Peru—food that dates back to the Incas!”

IN ADDITION TO HER DAY JOB, SILVER WORKS WITH PEOPLE’S INSTITUTE, A NATIONAL COLLECTIVE TO UNDO INSTITUTIONAL RACISM AND DESTROY SYSTEMIC OPPRESSIVE BARRIERS. THROUGH THEM, SHE VOLUNTEERS WITH THE BLACK PRISONERS’ CAUCUS AT STAFFORD CREEK CORRECTIONS CENTER. 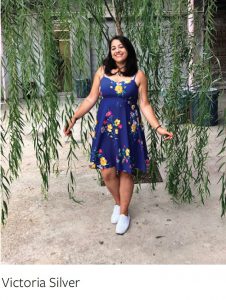 It’s hard to imagine how Victoria Silver fits so much social justice into one lifetime. Silver works as a Family Engagement Case Manager for homeless youth at Friends of Youth, a nonprofit in Redmond. She engages with youth who are experiencing homelessness or at imminent risk of homelessness. “I support them in whatever goals they create— this could be anything from obtaining permanent housing, to succeeding in their education, to staying off of drugs or alcohol, to engaging with their families and ensuring healthy family relationships and communication.”

In addition to her day job, Silver works with People’s Institute, a national collective to undo institutional racism and destroy systemic oppressive barriers. Through them, she volunteers with the Black Prisoners’ Caucus at Stafford Creek Corrections Center. She also volunteers at Northwest Harvest. “Shout-out to my days at EPS when we volunteered at Northwest Harvest, very soul-filling!”

One moment Silver is proud of is graduating from Western Washington University in Bellingham with a Sociology degree. She doesn’t describe herself as an exceptional student. She worked hard in college. “I always remember and will always value the EPS teachers who simultaneously held me accountable while also empowering me to see that I was doing great. They taught me to always keep going,” she says.

In fact, she’s still going. Silver has recently been accepted into the Community-Oriented Public Health Practice Program at University of Washington for her master’s in Public Health. “I believe at the root of youth homelessness are racism and, among other things, inadequate public health. Through an anti-racist and public health lens, I aim to destigmatize homelessness, racist stereotypes, mental health, drug and alcohol addiction, and prevent our young people from falling victim to the school-to-prison pipeline. I strive to make substance use education and sex education equitable and affordable for youth populations to encourage healthy choices and prevent behavior that could lead to family instability or homelessness.”

When she isn’t saving the world, Silver’s traveling it. “I have three citizenships—the United States, Israel, and England—and travel every year to Israel to visit my mom!”