“My partner and I stand in firm affirmation of the resolution, resolved: The United States should…”

WITH THESE WORDS (OR SOME VARIANT of them), the competitors in the room snap to attention, frantically scribbling down notes, cross referencing prepared cards of evidence, and furtively whispering tips or directions to partners. Sitting across from them, the judge languidly types notes onto a laptop, brow occasionally furrowing when a particularly outrageous argument is presented. We are now deep into the thick of things in a public forum debate.

At Eastside Prep, nearly all members of the Debate Team compete in public forum debate, a two-on-two team debate where each speaker gets to speak twice. In between speeches, debaters get to interrogate one another in lively crossfire rounds. The first speaker starts with the constructive speech, laying out the team’s case, either for or against the resolution. The second speaker then follows up with the rebuttal speech, which as the name suggests, refutes what the other team has laid out in their own constructive speech. The first speaker then returns with the summary speech, defending the original argument against rebuttals that have been laid out against it, as well as reinforcing the refutations against the other team’s case. Finally, the second speaker elegantly sums up the debate with the final focus speech, highlighting how and why the team should win. It is an intense forty-five minutes under the spotlight every round, coming up against opponents whose minds move just as quickly as they speak. But it is also an experience that members of the debate team thrive in and enjoy. 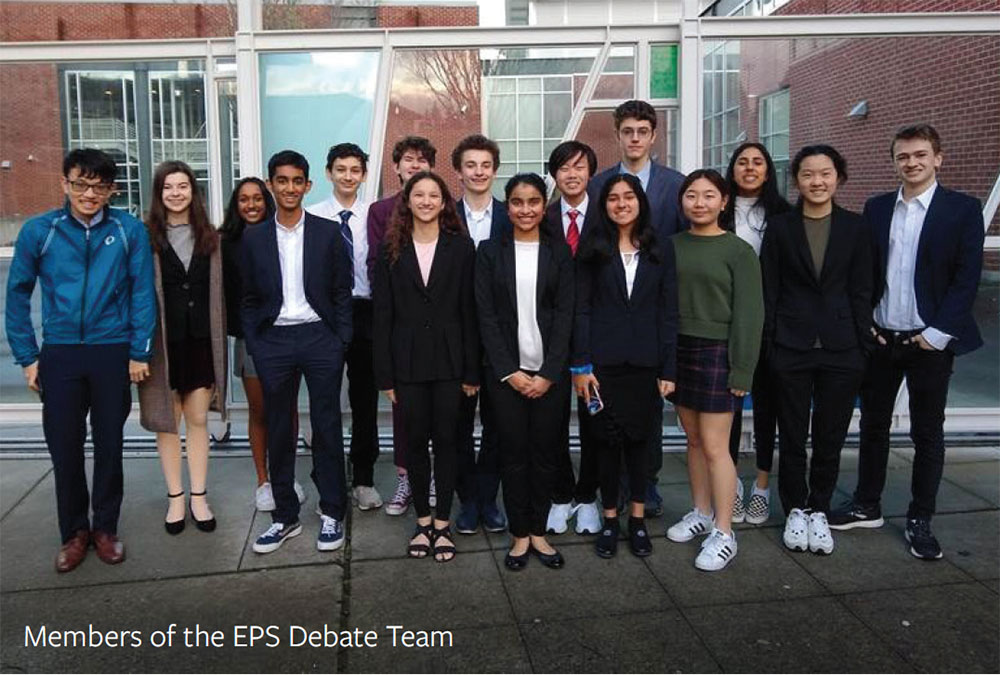 The EPS Debate Team has had a short, but highly productive history of existence over the last five years. Beginning as a club founded by Ryan Corner (EPS Class of 2018) and Aman Bedi (EPS Class of 2019), debate was constituted as an academic team in the 2017-2018 school year and the team has since grown from a handful of participants to twenty-five students this academic year. Led by team captain Ross (’20), a stalwart of the team since his freshman year, over half of the members this year are freshmen, hinting at further growth and success in future years. The team practices twice or thrice each week for two hours after school, and has competed in eight tournaments this academic year across the Puget Sound region. Starting in December, the team has also benefited from additional coaching by Grace Burchett and Raymond Lappin, two University of Washington students who enjoyed sustained success on the local and state circuit during their high school days.

Beyond practices, debaters invest significant amounts of time researching and honing their cases for the resolution at hand. Resolutions change either monthly or bi-monthly, meaning that this is a never-ending process. Debaters must prepare both a pro and a con case since a coin flip at the start of the round determines which side of the resolution each team argues. They also preemptively prepare a number of “blocks,” namely evidence that will be helpful in countering arguments that they anticipate opponents using. Additionally, they must organize their sources into easily retrievable “cards,” since opponents and judges regularly call for evidence during a round. The most intense moments of this process are often during the bus rides to tournaments, where fingers fly across keyboards, making those last-minute tweaks that just might make the difference between victory and defeat.

Ask any first-time competitor at a debate tournament, and a very common response is surprise at the level of sustained intensity demanded. A weekend tournament usually runs from 4:00PM to 10:00PM on a Friday, followed by a quick night’s sleep (if lucky) and then again from 8:00AM to at least 8:30PM on a Saturday. Throw in all the homework to be completed on Sunday, and it is probably easy to grasp how fatiguing consecutive weekend tournaments become. However, the EPS Debate Team members do this with a smile, as they enjoy the thrill of competition and the even sweeter taste of success. Indeed, it is only fair to clarify that tournaments are not all work and no play. Friendships have been forged in the heat of battle, and this is why debaters clamor to attend tournaments as regularly as possible.

During the 2019-2020 competition season, EPS has punched well above its weight, finishing on the podium in at least one type of competition at every single one of the tournaments we have competed in. Highlights of the season include:

As we survey an incredibly successful season for the EPS Debate Team, a big shout of thanks must go to Jeff Bandel and to the parents of the team members. One consequence of having such a large team is the need for judges, as competing schools must supply a number of judges corresponding to the number of competitors they enter. Mr. Bandel, and the various parent volunteers over the season, have very graciously spent their weekends with the team, sitting through round after round of debate, and gamely trying to make a judgment after every round. Remember, competitors only have one fast-talking team to deal with at a time, but judges have two! The team’s success this year could not have been possible without their assistance and we thank them greatly. Here’s to continued success for the EPS Debate team in the 2020-2021 academic year!