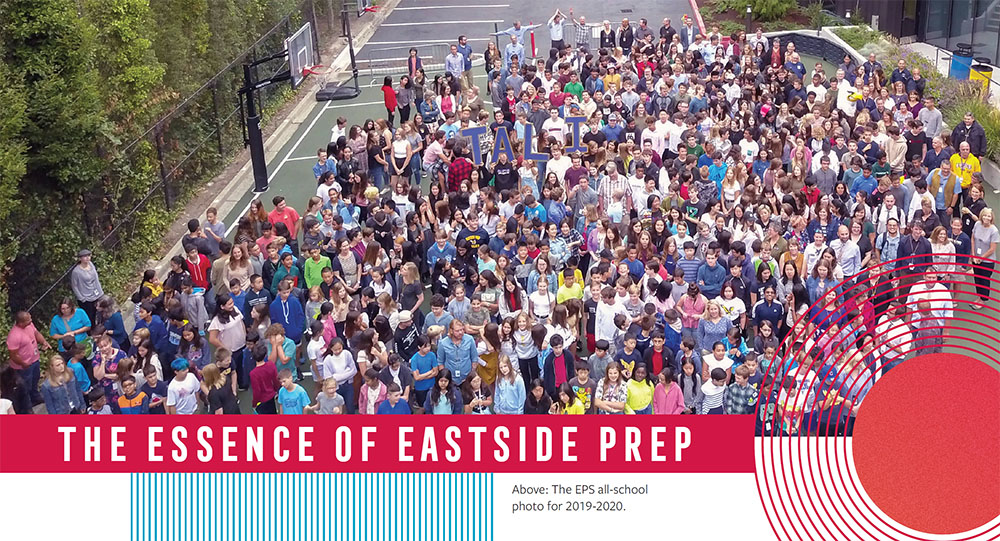 GIVEN THE HEADLINES THAT COVID-19 has accumulated since early March, one begins to wonder if anything else happened in the first half of calendar year 2020. This calendar year has been, for EPS, another step forward in its continuing evolution. Those who have been aware of the school since its inception know what a transformation there’s been. But if you joined the school in 2018 or later, there’s a good chance that you have no idea what it took to reach this point—and not much awareness at all of the evolution of the community culture.

The COVID-19 experience had one positive impact on us; we were forced to think hard about what we were willing to give up in order to keep students and employees on campus. We had to choose among competing goods in the midst of an environment that has never existed before, and about which we still have very little certain knowledge. If I had to choose one word that characterizes the single most consistent thread running from 2002 to 2020 in the life of EPS, the word would be “adaptable.” The adaptability I’m talking about is not simply being able to pivot at a moment’s notice; it means maintaining the mission—the essence—the soul of the school while simultaneously bobbing and weaving to enable it to thrive as the external environment changes, and as new people join the community every year.

Preservation precedes alteration in the adaptability of schools. As we respond to a changing environment and a population that shifts constantly, a school has to hold on to what it is in its essence while it makes room for evolutionary transition. It’s interesting to think about how a school changes and how it stays the same in an evolving social/ political/economic terrain. We have dozens of examples of successful entrepreneurial enterprises in this region; but I would argue that the adaptation a school has to allow is very different from a traditionally entrepreneurial process. A successful entrepreneur defines a very specific problem, and markets the best possible solution for that problem. It has to be scalable; but the solution it sells is the solution it sells. There are updates—so improvement is possible, and the universe hands out plenty of challenges for entrepreneurs to avoid—so that requires maintenance.

A school adapts by keeping itself focused on the mission while traversing an ever-changing landscape with a community that continues to change as well. In 2020-2021, three of the original founding members of the school community remain involved. For those three people, everything has changed—and nothing has. For those three (Karen Mills, Jeff Sanderson, and myself) the school is still what it was when we first began. For the students, faculty, and staff joining us for the first time this academic year—it’s just always been this way. Eighteen years from now—in 2038—there will likely be no one in the school who was a part of its original membership. But it will still be the same school—assuming that the mission is strong enough to provide the ballast needed to enable adaptation.

When EPS had sixteen students and six employees, it was hard NOT to know everyone. It was hard NOT to check in with everyone before making a decision. Fast-forward eighteen years. Every year that EPS has continued to do what it does, there were complaints and worries that the school was changing (read “adapting”). That’s a little bit like being sad that a child has become an adult. That’s all it CAN do. What else did we have in mind?

And now…the philosophy lecture that often finds a way into whatever I’m writing for any audience begins. Aristotle believed that everything could be explained by identifying its four causes: material cause, formal cause, efficient cause, and final cause (and, no, I did not have to look those up). Material cause is just what it claims to be—the stuff out of which something is composed; wood is the material cause of a chair. Formal cause is the essence of the thing. So, the essence of a chair is “sit-ability.” Efficient cause is whatever is causing the thing to be or to be changed, but is different from the thing, itself. The efficient cause of a chair is the carpenter. Final cause is “that for the sake of which” a thing exists. A chair exists to provide seating. There are particular qualities that must be present for a chair to be a chair, (i.e., one must be able to sit on it). If that isn’t possible, then it isn’t a chair. It could be any color, made out of any material, and fashioned by anyone who knows how to make chairs, but all of those accidental qualities are just that—accidents. The formal and final causes remain.

The point of the four causes is to explain how a thing can change but continue to be itself. The Greeks were concerned with understanding the difference between unity and multiplicity. “Which one of those is real?” they asked. What Aristotle does with that question is demonstrate that it presents a false dichotomy. Things come to be, they change, and sometimes they cease to be. The being of the entity doesn’t change even though the appearance of it might. In other words, the substantial essence of a thing is the “what the thing is.” That it changes or moves around produce only accidental changes. This is how we explain, for example, that a tree does not become a toaster. A child does not become a cheetah. The thing has in itself its essence, its soul, its being-ness; it can change color or location, and the essence is not disturbed.

Let’s talk about people. A rational animal is made of all kinds of materials/matter/atoms, its formal cause is rationality, its efficient cause are its parents, and the final cause is to become a rational animal. You are, now, the same being you were on your date of birth. But myriad things have changed you—accidentally. That is to say that no matter how tall you are, or what color your eyes are, no matter where you were born, or how you were raised, you are essentially—a rational animal—the thing you have always been.

Apply the same categories to a school. A school’s mission is its formal cause. Its community is the efficient cause. Its facilities are its material cause, and the final cause is education—that for the sake of which the school exists. The efficient cause of a school is its community. The community acts on and in the entity, but is different from the entity, itself. Those of us who teach in the school change it. Those of us who attend the school change it. Every new hire and every newly accepted applicant will impact the school. In other words—it may look different from year to year. But it is—essentially—exactly the same thing it was at inception.

There remains one important distinction to mention. Natural things and human-made things require a different kind of efficient cause. Just as a tree cannot become a chair—unless it is made into planks used to build the chair—in which case it would be the material cause of the chair—and just as a human baby cannot become a cheetah—natural things evolve with a teleological purpose. Nothing can interfere with that.

For a school, however, the community is the agent acting on the entity, making it evolve in this or that direction. It’s the power of the mission—the soul of the school—the final cause, that determines what the real impact of the community will be. This is much less teleological. It takes action and deep knowledge of the mission/essence to enable the adaptation to take place without interfering with the essence. There is an opportunity—several, in fact, in a single day of decisions and actions—to lose sight of the mission. And if it cannot be salvaged, the final cause will be unattainable. It will become a different thing.

The mission is the essence of the school. The school adapts to all manner of influences; it has to do that to survive. But if the community fails to hold the mission as its formal cause, the entity will lose its way. The farther from the mission the school drifts, the likelier it will become “not the same school.”

Eastside Prep is still the same school it was eighteen years ago; it just appears to be very different. And what kind of change is the appearance? It’s accidental. It doesn’t define the entity. It has nothing to do with the essence of the school. We’ve just learned how to adapt—effectively.