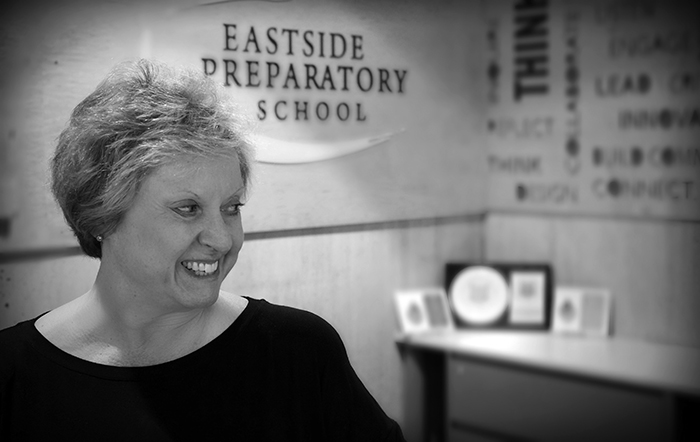 Dr. Macaluso was originally retained by the Eastside Preparatory School Board of Trustees in August 2002, to guide them in the development of the school’s mission and vision. She served in a consulting role until March 2003, when she accepted the position as Head of School. Under Dr. Macaluso’s guidance, Eastside Prep has grown from sixteen to 457 students, the campus has expanded from 5,000 to over 100,000 square feet, and Eastside Prep has solidified its reputation as a college preparatory school with a rigorous academic program. In addition, Dr. Macaluso has overseen three major construction projects on the EPS campus – the remodel of the Levinger-Poole Commons (opened in 2012), the construction of the science and gym facility – The Macaluso Academic Collaborative (opened in September 2015), and the most recent project – the 50,000 square foot TALI building housing a new theatre, science and general purpose classrooms, rooftop garden, and administrative offices. All this, while keeping our focus on the most important component of our school – the students. Previously, Dr. Macaluso spent nearly thirty years in independent schools and university education, serving as teacher, college counselor, Upper School Director, President, and Head of School in three different schools. In 1999, Dr. Macaluso retired from the headship of Lakeside School in Seattle, after a successful seven-year tenure that included completion of a $50mm capital campaign, construction of three new buildings, quadrupling of the school’s endowment, and programs designed to enhance the quality of teaching. Lakeside’s Macaluso Endowment for Leadership Development was established in 1999; she is the recipient of the 2006 Willard Wright Award for Distinguished Service, given by the Lakeside Board of Trustees to acknowledge extraordinary service to the school.

“I’ve thought about this for a long time – and I’ve tested it personally. There isn’t anything one can do with one’s life that is more important, more valuable, or longer lasting than teaching. I’m reminded of that every day when fifth graders and Upper School seniors walk past my window. In only eight years, each student is transformed. Think about the impact over the course of a lifetime.”