“When thou seest an eagle, thou seest a portion of genius. Lift up thy head.” William Blake

By Bob Baldwin, Director of Operations

There was really nothing particularly inspiring about the confines of Eastside Prep’s first classrooms. In fact, its beginnings have little to do with its campus at all. As office space it was tired, worn, and noncompliant, but as classrooms it was entirely inadequate. But that was, after all, the point, or at least one of them.

EPS set out from the onset to break molds and find a different or less conventional way to approach education. Rome wasn’t built in a day, and neither was the campus. The stories are legendary. Board members hand-painting folding chairs, desks from secondhand office supply stores, retaining walls made from compost and soda bottles…the school set out to find a road less traveled and uniquely its own. 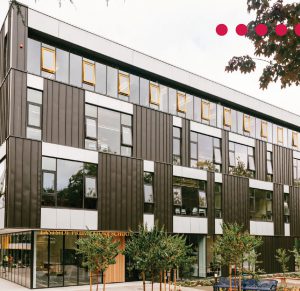 Not everything would stick, but the collaborative spirit and a fervent commitment to a vision—to think, act, lead, and innovate—would be the glue that held things together.

I entered the scene in 2011, when the school faced remodel budget concerns related to some newly occupied space and some of its first significant programming challenges: the need for a large gathering space and a dining hall. After scrapping a couple of overly ambitious ideas, we sprinkled a little pixie dust on Buildings 21-22 (yes, the building names even lacked originality) and the Levinger Poole Commons (LPC) was born.

While a series of more modest improvements had occurred prior to 2011 (classrooms, science labs, a black box theater), in 2011 the space in which classes and programs would reside became purposefully designed. Even so, program and population growth made every space temporal. Everything was up for grabs and a never-ending series of grand “what ifs” took full flight.

Before we wander too far astray, it is important to note that EPS is not now, and has never been, about its buildings. Even in its current form, the buildings are a casing, a place to do what it does, a home. So when a discussion came around to design, it was always about a place to work, to feel safe, and to be free to learn. Classic shapes and proportions, simple unpretentious spaces ideally that would adapt and morph to meet both need and want.

EPS SET OUT FROM THE ONSET TO BREAK MOLDS AND FIND A DIFFERENT OR LESS CONVENTIONAL WAY TO APPROACH EDUCATION. ROME WASN’T BUILT IN A DAY, AND NEITHER WAS THE CAMPUS. THE STORIES ARE LEGENDARY.

It was a natural evolution for the innovation in the classroom to impact the floors, walls, and ceilings that attempted to hold it under its roof. The LPC would literally rip the roof off the building to create the volume for the school’s first meaningful renovation—a cafetorium. It met a need and lived comfortably inside the resources of the moment. 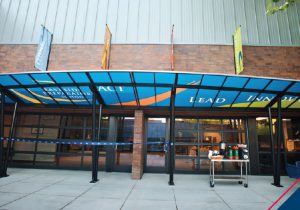 In 2014, the first ground-up building was conceived. Again, born out of need (science classrooms), the school set out to buy an adjacent building when the City of Kirkland and a zoning change blessed EPS with the ability to go up instead of out. So instead of buying a building to house some science classrooms, EPS invented what is now The Macaluso Academic Collaborative (TMAC). We needed science and tech labs but, with this newfound volume, we put a gym on top.

TMAC would marry the program and the way EPS would teach with its real estate in a meaningful way: classrooms that would adapt and change size, shape, and configuration; technical teaching tools fed in from neighboring companies to incubate new ideas; collaborative meeting spaces, innovative use of common areas, whiteboards everywhere; gathering spaces to allow for small groups, medium-size collaboratives, and entire grade levels to meet, to innovate, and invent together.

The design approach for the TMAC came to the school quite naturally; it came from the way it invented everything else. It came from collaboration and a commitment to innovation. Moving into TMAC was effortless, like wearing a well-tailored coat. The building opened, EPS added the faculty and then the students,
and we were off to the races.

ALL GOOD DESIGN COMES FROM A TENSION THAT MANAGES ITS CONSTRAINTS: THE CODES, THE RESOURCES, THE TIME, ETC., BUT THE BEST DESIGN MARRIES THE FORM TO THE FUNCTION.

And then came LPC (version two) and TALI… and finally a Middle School.

The kitchen and the dining hall had to grow with the community and so, in 2017, it did. Then in 2018 TALI Hall would replace four original buildings and open even more possibilities—multipurpose spaces, art studios, a theatre, gathering places, meeting rooms, and a roof deck.

The Middle School Buildings (23 & 24), where the first classes began in 2003, had been poked and prodded twisted and turned over the years. It was the epitome of the EPS value of form following function. In reminiscing about the school’s history recently, these spaces had been the last of the original campus: classrooms, a lunch room, a combined orchestra and band room, art rooms, and offices. In renovating the Middle School, we were evolving the spaces that helped nurture the nascent idea called Eastside Prep. In its twentieth anniversary, it seems only apt that these spaces have caught up to the rest.

All good design comes from a tension that manages its constraints: the codes, the resources, the time, etc. But the best design marries the form to the function. The EPS environment is a blank canvas, intended to evolve year after year. Its willingness to innovate and continue to adapt is ingrained in the very fiber of faculty, staff, and leadership. No doubt, we can expect to see EPS continue to adapt its buildings as it adapts its programs. Innovation of this nature will be impossible to bridle.

Where EPS goes next is only a dream as we rest here for a moment. But that will change—it’s the only thing of which we can be absolutely certain. The skies have so much to see, if we only lift up our heads.