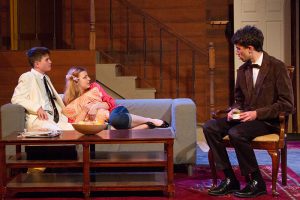 As our second major after school drama production (the Upper School play) comes to a close this Saturday, I would like to share a sneak peek behind the curtain and reveal all of the planning and work that it takes to create such a show.

Starting in late Spring a theme is chosen by the Fine & Performing Arts faculty for the coming academic year (this year it is fantasy) and as productions are finalized over the summer, we begin planning schedules, securing licensing, and buying scripts. The real work truly begins when students arrive to audition. Over a series of days, the field of actors is narrowed and roles are selected. Parents are often recruited at this point to help with key parts of the production such as costumes and ticket collection. Students begin rehearsals with a read-through of the entire script, and over the next six to eight weeks will put in over 60 hours of rehearsal time—working to memorize their lines and blocking. At the same time, costumes and props are being collected and built, the set is being designed and constructed with the help of the stagecraft classes, and lights are being moved and refocused.

In the last two weeks before the performances, the LPC begins to hum with activity. Ticket reservations are launched, posters and advertisements are disseminated on TV monitors, social media, and emails. The set, costumes, and props are coming together; actors begin rehearsing on stage slowly adding in all of these elements. The weekend before the opening night, tech weekend, the actors and technical directors work through all of the technical elements of the show—making sure lighting and sounds are correct and the props are ready to go. The last few days before opening night are dedicated to dress rehearsals, running through the play in its entirety with actors in costume. Starting at 3:30 on the night of the first performance the LPC is dedicated to the play, the wall is shut and preparations begin for the evening’s performance.  The actors are called at 5:30 and begin to get into costume and makeup while student crew members are setting the stage and chairs. The house opens at 6:30 and the show starts at 7.  As an experiment, we are closing the run of this show for the first time with a Saturday matinee performance.

Following the closing performance, the actors and stage crew will celebrate and help strike the set as on Monday the LPC must return to its other functions…and then auditions for the all school musical will start on Tuesday, our final afterschool drama production of the academic year.