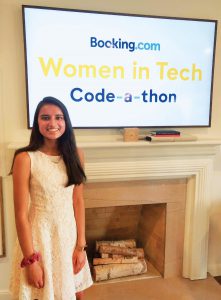 RECENTLY, I HAD THE AMAZING HONOR to attend Booking.com’s inaugural Women in Tech Code-a-Thon held in San Francisco. I was scrolling through LinkedIn at around 9 PM on a Sunday when something caught my eye. “Code-a-Thon-Application… ten young women will receive an all-expenses paid trip to San Francisco on April 27 through 29 to be mentored by some of [Booking.com’s] brightest tech talent.” I was already interested in computer science, having taken Programming 1 and 2 my freshman year as well as having attended various summer camps hosted by University of Washington’s Computer Science and Engineering department over the past few years. However, I was not completely engrossed in programming and was not entirely thinking about pursuing it in college, making this the perfect opportunity to explore the industry and my interest in it.

I looked at the application deadline and quickly realized it was due in a couple of hours. Although I did not feel very confident about being selected, there was no harm in applying, so I filled out the application to the best of my ability and pressed submit, not even telling my parents that I was applying and that we could potentially be going to San Francisco in less than two weeks. Not even two days later, I received an email from Angela Cavis, one of the main organizers of the event, letting me know she loved my application and would like to set up an interview. I scheduled the interview for Thursday during one of my free periods. It lasted for only fifteen minutes, so I was again unsure of what to think, not expecting much. At this point, I decided I should probably let my parents know about the opportunity. My dad, not telling me at the time, actually scheduled a day off from work for April 29th because he felt so confident that I would be selected.

There have been studies that show correlations between socio-economic disparity and the rise in technology and we as a generation must work to stop that.

Less than twenty-four hours later, on Friday morning, Angela called me—I assumed she had a question about my application, but she was actually giving me the amazing news that I was selected! I was ecstatic and so overwhelmed. It felt so surreal that I was accepted to something I had applied to on a whim only five days earlier and would be in San Francisco learning and coding on an all-expenses-paid trip in exactly one week.
The next few days were pretty hectic, signing forms, buying and confirming plane tickets, and rescheduling some tests and major
assignments I had.

A week later, we were on our way! The classes were held at the secretive CNET Smart House, where CNET tests out new technology before being released. We were taught by two instructors from the Rithm School in San Francisco—both of whom are self-taught programmers. Our final product was building personal websites that can be used as a digital resume and a platform to express ourselves, full of complex animations, interactive components, and beautiful design. We used HTML, CSS, and JavaScript together to create the functioning website. They were all languages that I already had some experience with, but this opportunity allowed me to dive deeper into them. Along with making the website, we visited Booking.com’s incredible office in San Francisco which is the epitome of a collaborative space due to its open floor plan and inviting environment. Our talented Booking.com mentors flew all the way from their headquarters in Amsterdam. Both were powerful female leaders from different backgrounds, one being a full-stack developer and the other a lead designer. They talked to us about the struggles they have faced as well as all the wonderful aspects of technology that make them love what they do each and every day. Additionally, they taught us about new innovations in technology that every company is focusing on, including machine learning and artificial intelligence. Originally, these used to just sound like buzzwords to me, but now I understand their importance and usage in modern technology.

Coming out of this code-a-thon, I feel more encouraged and confident in my ability to pursue computer science. 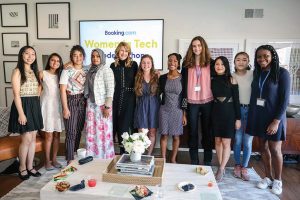 On Monday evening, the last day of the program, we had a reception at the CNET Smart House that our parents were invited to, where actress and female empowerment activist Laura Dern came to speak to us. We had invigorating discussions about the future of technology and our individual goals for our futures. For me, I talked about the importance of using technology as a platform for social good. As technology becomes more and more complex at the center of everything we do, it is important to think about its accessibility. There have been studies that show correlations between socio-economic disparity and the rise in technology and we as a generation must work to stop that. Technology has so many applications in social entrepreneurship, from creating new medicines, to access to free online educational materials, to raising money and awareness for campaigns, to helping the developing world through improved communication and resources.

Coming out of this code-a-thon, I feel more encouraged and confident in my ability to pursue computer science. Historically, women have been discriminated against in STEM fields, and computer science especially. As a whole, the number of women in STEM roles has been gradually increasing, however, representation in computer science is left unchanged. Women comprise only 19% of Advanced Placement Computer Science test-takers in high school and earn only 18% of undergraduate degrees in computer and information sciences (National Center for Women & Information Technology). When looking at women in power in tech companies, the percentage gets lower and lower. Gillian Tans, CEO of Booking.com, is one of very few women in power in a large technology-based company. Through programs and opportunities such as this code-a-thon, women and girls are more likely to get engaged in and pursue careers in computer science. That being said, I aspire for a day when such programs do not exist because they are not needed.

I am so thankful for the opportunity I had and for everything I have learned through this experience. I am thankful for the nine other girls from around the country who I am glad to call my friends, for Laura Dern and her beautiful words about women empowerment and the importance of women in technology. And for Gillian Tans being such a role model and encouraging women to pursue careers in STEM, and for the teachers and mentors for their guidance, support, and encouragement.

Surbi Jain is a member of Eastside Prep’s Class of 2020. In this issue of Inspire, she writes about her experience at a code-a-thon event last year.