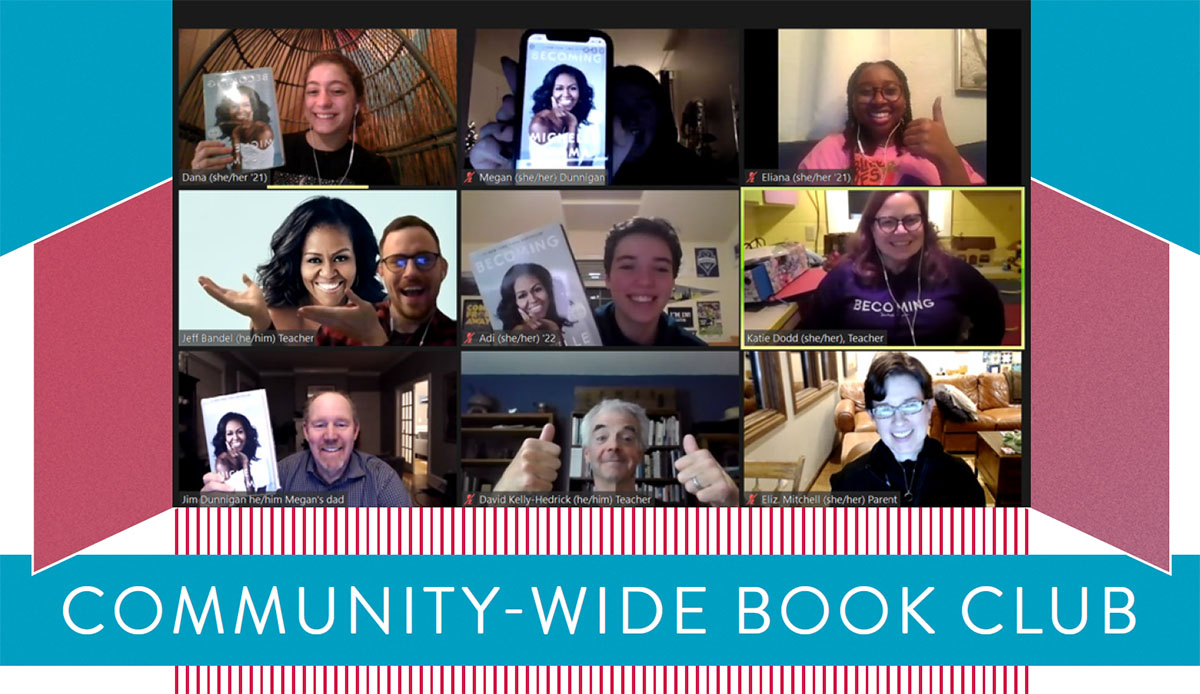 By Dana Hoballah and Eliana Swai (both EPS Class of 2021)

During Quarantine, we have all felt increasingly isolated while adjusting to our new “normal.” As humans, we depend on socialization and interaction, yet, by not going to school in person and not seeing friends or teachers, we were simply lacking this basic necessity. We had originally created a club last year as a way for Upper School booklovers to come together to build relationships over common interests, snacks, and drinks.

But, in a year where we’ve watched civil unrest, political discourse, and amplified conversations around race and equity unfold, we wanted to find ways to come together as a community and create an open dialogue on how we can persist in our changing world. With this need in mind, we created the EPS Community-Wide Book Club and have been extending the invitation to students, staff, faculty, parents, and alumni to participate in a virtual discussion.

For our first remote book club meeting, we came into the call having read Michelle Obama’s memoir, Becoming. The setup was simple and centered around facilitating personal interactions with as many people as possible. We opened the meeting in a big group, sharing our names and connections to EPS, and then broke out into three-person discussion groups, switching rooms and groups after twenty minutes. Because we kept the groups small, we were able to create more intimate spaces while fostering a natural discussion and avoiding the all too familiar, “Oh, sorry, didn’t mean to cut you off, you go ahead.” After these two small-group discussions, we spent the remaining thirty minutes in a conversation with the entire group. We answered the questions, What was your “aha” moment? Was there anything someone else said that stood out to you? How have you changed after reading this book?

After the book club meeting, the two of us expressed our surprise at the willingness of people to share so many personal perspectives. Michelle Obama’s life was rich with stories from her first piano recital in elementary school, to her life as the first Black First Lady of the United States. Through talking about her life experiences, the book club group was able to look at her story from perspectives different from our own and explore how each of our identities formed our reaction to the book. We wanted to share some of our conversations coming out of the book club meeting that day.

One theme that kept circling around in my small group sessions is the idea of Michelle Obama being a strong woman, balancing her own career while being a mother, a spouse, the First Lady, and other adult responsibilities.

I completely agree. In the call I was on, we took time to discuss the idea of being bold and taking charge of your own life. I remember one student expressing Michelle Obama exists as a mother, a daughter, and a public figure. Knowing she has obligations to others, and still being one of the most empowered women in America through making choices for herself and who she wants to be. To that student, the word “empowerment” was redefined. They said that sometimes it feels like you either have to be completely career-oriented or you have to be completely family-oriented. Yet Obama existed in both of those paths and many more.

I think she set a new model: she was able to be a strong woman balancing her work in public service and her new responsibilities as the First Lady, while also taking her daughters on college tours and hosting playdates. What was great about the book club was that there were parents in the call who could relate to this experience of being a working woman, something that no high schooler present could talk about from a personal experience.

Exactly, as Upper Schoolers, we pulled from her upbringing and her interactions with classmates in school while we heard from parents or faculty who were pulling from her experience as a mother or in the workforce.

Yes! I remember there was a parent who responded to the part where Michelle Obama wrote about how her parents spoke to her and her brother as if they were adults and didn’t hide the challenges they might face in the world. For example, when her brother was caught sneaking out, her parents let him go because they wanted him to learn from his own mistakes or experiences. While this EPS parent said she was raised in a much more sheltered household, where her parents kept a closer eye on what the kids were up to, and how she has always done that with her own children.

Oh, that’s interesting because a parent in my group said that where she grew up, it was the norm that kids would run around on the street doing things like investigating a car crash without parents around. She related to Obama’s parenting style where she learned most of her life skills simply from trial and error in the real world. What was unique, though, was that out of all of the parents I talked to, they all agreed that their kids don’t have the desire to go out and explore as much as they did.

Yes. It was nice as a high school student to hear the perspective of someone that is in a different place in life than you. It was also cool to see how we took the exact same section of the story, but everyone read it from different angles.

Right, like in everyday life, our separate identities change the way we respond to different situations. To me, this book seemed so clearly about what it is like being a Black woman in America; I was expecting most of the conversation to surround that, but as I was the only person with that identity in the call, it became clear that that piece of it simply did not resonate with others as it did myself. For me, as a Black girl in a predominately white school, I was in awe reading about how she navigated spaces that did not always reflect her while still staying true to herself. I was hesitant to open up about this to the larger group, especially because no one else had brought it up yet, but the space that we collectively created allowed for me to feel comfortable to share how this book interacted with this part of my identity. The comment was welcomed with warm nods and rolling support in the side chat.

Do you feel like speaking about Michelle Obama’s experience of being the first Black family in the highest position in the country was something that was missing in our conversation?

Well, in the moment, I was thinking this was a conversation about our experience with the book, so with nobody else sharing that identity, any conversation about it would be forced. I was not trying to take up too much space, or start to turn into the spokesperson for how Black girls interacted with this book. And this was true for many singularly-represented identities in the call. But I knew I couldn’t leave the conversation without saying something about it as Michelle Obama is the person that I look up to as a figure for Black female empowerment. But maybe that says something about the state of our nation right now: it’s necessary to speak on stories whether you can or cannot relate to them and it’s okay not to have anything to say.

Exactly. We need to have more opportunities to have these spaces to have conversations that allow us to look beyond our own lens and put ourselves in someone else’s shoes. Speaking of, I hope many more people from the EPS community join us for our next book discussion.

Yes! I can’t wait to dive into the book chosen by previous participants in our next book discussion.