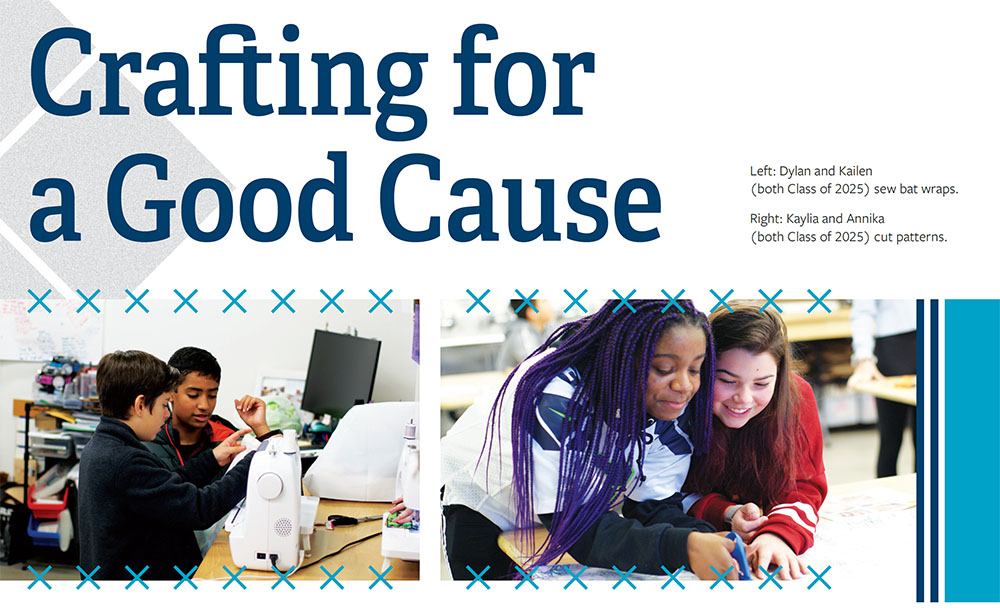 IN THE SEVEN YEARS I HAVE WORKED AT Eastside Prep, I have always found our vision to “inspire students to create a better world” very empowering and exciting. I have, however, struggled to find practical ways to teach this vision and develop projects in my classroom for students to practice it. Many times, when I would bring this topic up in my classes, the students’ eyes would immediately widen and one of the first questions asked is, “I’m just a kid, how can I possibly do anything that would change the entire world?” I would always respond with stock phrases such as “You are the future, you can do anything you want to do.” And “Everyone can do something to make a small change.” However these statements fell flat and the vision would tend to get lost in the day-to-day amongst math problems, science labs, and robot games.

The rescue organizations in Australia had put out a call to crafters across the world to use their skills to help the injured and orphaned wildlife. 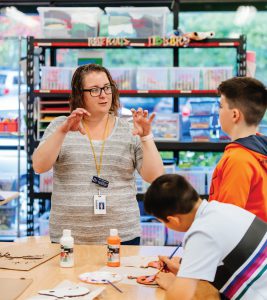 When I had the opportunity to redesign our seventh-grade MAKE class this school year, I knew I wanted to put a renewed focus on our vision statement and provide practical skills and applications for my students to take the idea of creating a better world and do small things in our classroom that could make a difference.

This winter, I, like many of the students in my classroom and people around the world, had been watching news of the devastating fires in Australia and found my heart breaking for the people and animals who were losing everything in the wake of this disaster. Before leaving my house to head to school one morning in January, a news story flickered across my television that caused me to stop and decide to change course in the lesson I had planned for MAKE that day. The rescue organizations in Australia had put out a call to crafters across the world to use their skills to help the injured and orphaned wildlife. Rescuers across Australia were finding and caring for more and more animals who had lost their mothers and homes every day and they required special care. Items such as pouches for young joeys, mittens for burned koalas, and wraps for bats were all in need, and a group called the Animal Rescue Collective Craft Guild (ARCCG) provided all of the patterns and instructions required to put crafting skills to good use.

I immediately knew this would be the perfect time to teach a short sewing unit to my MAKE class, so I ran downstairs to my home sewing room to collect all the material that would be required for the students to make some bat wraps (which were one of the most needed items at the time) with a simple enough pattern for Middle School students to follow as they learned to sew. The ARCCG had provided the patterns and detailed instructions on their Facebook page, along with photos of the animals that had been helped by the projects already available. The animals being rescued were overwhelmingly young bats who should still be with their mothers, but many of their parents were gone from the fires. The bat wraps simulate mothers’ wings and are used for injured and orphaned bats so they feel safe and secure both in transport to the rescue centers and afterward as they heal and grow before being released to the wild when they are ready. 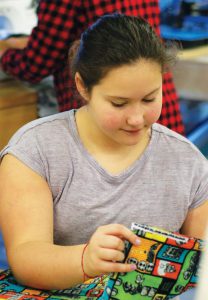 When I introduced the project in class that morning, my students were instantly able to tie it to the vision statement and were excited to get started. Darioush (’25) said, “Hearing the backstory and reasoning for the project made it a really enjoyable project,” and he in particular was excited to learn how to sew, something he’d been wanting to learn for a while. I had instruction sheets and the pattern printed, fabric, meter sticks, stuffing, and the sewing machines prepped for the class, and students gathered into small groups and got right to work. Each group delegated different tasks for the project to its members. Some students were using the meter sticks to measure out and cut the material as the instructions indicated, some were running the sewing machines, and others were stuffing the pillow part of the wrap with Poly-fil. Students would switch jobs once one of their wraps was finished so everyone got the opportunity to learn how to follow a pattern and use the sewing machines. Lorie (’25) noted, “Some people worked in groups and some people worked alone, but all together we made a lot of bat wraps and everyone contributed.”

The Makerspace was a flurry of activity for the entire class period and then some. Many students rushed to finish their lunch after class that day so they could come back to sew some more, and everyone begged me to allow them to continue making the wraps the following class period. Before we ran out of material (which was the only way they would agree to stop making the wraps!), the class ended up sewing more than forty bat wraps. I piled all the wraps we made onto a table and the students couldn’t believe how much they were able to do in those work periods. Toby (’25) remarked, “Making the bat wraps really showed me how much can be done if you are inspired to do something.”

“It was so inspiring and empowering to know that we could make a small difference in the lives of the poor animals.”

After the unit was done, the students and I reflected on the project and our vision statement to create a better world. Each of the students were able to recognize that even if they are “just kids” and can’t necessarily change the entire world, they each have something they can contribute that can make even the smallest difference, and that all their small contributions add up to real large-scale change. Arya (’25) said, “It was so inspiring and empowering to know that we could make a small difference in the lives of the poor animals.”

We packed up the bat wraps with a card the class made to accompany them in a box and dropped them off at the Pacific Northwest hub in Bellevue, where volunteers were collecting all the wraps, joey pouches, and other donations, which were being then sent to a variety of rescue organizations in Australia. The American regional hubs built a sister Facebook group to the ARCCG called Relief Crafters of America, which hopes to keep the movement of using craft and making skills to help animals by sharing other needs for animal rescue organizations in the United States. I plan to keep these types of projects going in my MAKE classroom and beyond and to continue to use similar projects to bring student attention to creating a better world, one craft at a time.