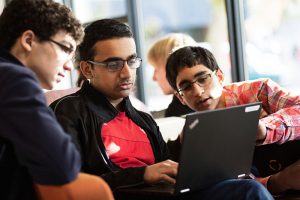 In an upcoming Inspire article Dr. Macaluso refers the ancient Greek concept of idiocy (Parker, 2002). For the Greeks, idiots were people who do not take part in public life. Parker, translating that conception to the modem world, comments that “idiocy…is an enormous threat to the continuous, hopeful quest for a fuller realization of democratic ideals.” It follows that the opposite of idiocy is citizenship.

One of the greatest obstacles to being a well-informed citizen amidst the glut of information in the 21st century is deciding what information is worth paying attention to, and further, what is the value of that information.

Throughout the EPS curriculum, students practice being critical consumers of information. In particular, the thinking done in social science classes from the fifth through twelfth grade stresses understanding the world of the past while making sense of the current world—politically, socially, economically, and culturally.

An elective being offered to EPS Upper Schoolers for 2018-19 school year, Media Literacy: Navigating the Digital Age, asks students to evolve their practice of citizenship by developing a discerning palate for the information by which they are surrounded and, in which they are swimming. Here’s more information on that course:

Media Literacy: Navigating the Digital Age
Humans beings and citizens, the real and the virtual, data and big data, media and social media, news and fake news, screens and screen time. In a time of information overload and a world dominated by the digital, how do people become wise consumers of information and make sense of themselves in society? In this course, students: (1) consider frameworks that inform decisions on where to direct their limited reserves of attention; (2) develop more critical lenses to discern what makes information meaningful and worth consuming; and (3) practice using more precise analytical knives to deconstruct experience and information; and ultimately, (4) develop a cogent picture of their reality. Coursework considers (but is not limited to) the ubiquity of internet information and digital communication, the accuracy of popular media sources like Ted Talks and blogs; the reliability of online, print, and televised news sources; and the expanding role of news satire. Specific attention is given to the cognitive structures that help us sort the world as explained in Levitin’s The Organized Mind, the evolutionary roots of bias and decision-making described in Kahneman’s Thinking Fast and Slow, and the forces that guide our reasoning in Ariely’s Predictably Irrational.