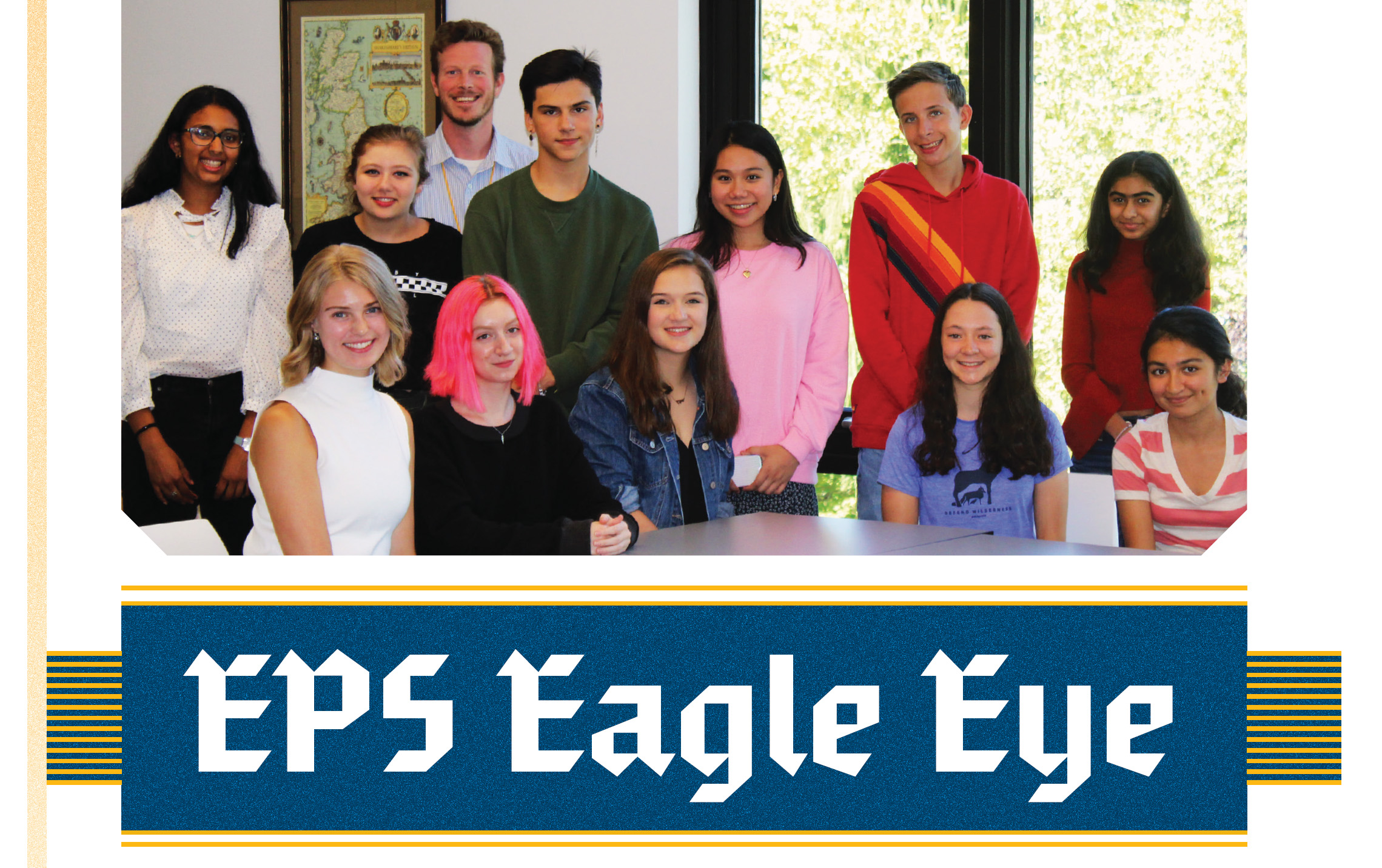 SITTING IN ON OUR WEEKLY Eagle Eye meetings where student writers and editors discuss the upcoming edition, I overhear discussions of experiences at the Seattle Women’s March, the best person to get inside information on the school musical, James and the Giant Peach, and a spirited debate on the best meme of the month. It’s at once lively and silly, and very much inspiring. Since Eastside Prep was founded, students have been publishing and showcasing their work—in the yearbook, during the Fine and Performing Arts Showcase, in the literary magazine, and at the Coffee House. The student-led newspaper is another avenue for this expression with the power to generate inquiry, encourage discourse, foster collaboration and, perhaps most importantly, develop community.

My involvement with Eagle Eye began seven years ago when I was approached by a few sophomore students interested in developing an online publication. We met once or twice a week during shared free periods and occasionally after school to discuss ideas for articles and to work on developing a website. We were a small group so the students were only able to publish content every few months. As our student population grew, there was increased interest in the club on campus and we made the decision to publish a physical newspaper in addition to the online content to gain more readership and prominence in the school community.

During the clubs period, students brainstorm article ideas for future issues by discussing upcoming events on campus, exploring news in and around the city, and thinking about current events locally and internationally.

The current iteration of the paper is developed mostly during the middle band, a forty-five-minute time slot every Thursday. During the clubs period, students brainstorm article ideas for future issues by discussing upcoming events on campus, exploring news in and around the city, and thinking about current events locally and internationally. Students leave with an assigned topic and go about researching, interviewing other students and faculty members, and thinking about their article from multiple perspectives. Subsequent clubs periods are spent workshopping and editing articles, checking facts, and ensuring that the work is ready for publication day.

The newspaper’s Editor-in-Chief, Siena (’20), reflected on her early interest in the newspaper stating, “I joined the newspaper club when I found that it contained all of my interests in one spot.” Siena’s dedication has been instrumental in expanding the club’s membership and ensuring regular publication. She also implemented thoughtful organizational structures to define committees focused on advertising, content editing, and publishing and worked to distribute leadership responsibilities across the team. Her greatest takeaway from the student paper is an appreciation for a team excited to learn and write about a wide range of topics from public policy in the United States to the grand opening of TALI Hall.

Other club members have noted a change in their perception of the club since signing up; Julian (’21) recalls “At first I was a little iffy about joining because I wasn’t a huge fan of writing. After the first issue though I really took a liking to it. I think my favorite part of the club would be the community, I think we all get along really well.” Panchali (’21) reflects, “Honestly, I thought newspaper was going to be boring and all of us would be writing all the time. But the EPS Newspaper Club is super inclusive and has a fun environment. I have always enjoyed going to the meetings since the first day I started.” Emme (’21), Content Editor, writes, “Once I got the hang of writing and editing, it turned out to be something I really enjoyed being a part of, and especially because of how welcoming everyone has been.”

Student members can also explore and report in-depth on issues of personal interest. Sam (’22), who joined the newspaper in spring 2019, notes “I think that the club is fun because you get to choose what to write about, no one else telling you what to write.” Writer Maya’s (’22) interest in women in leadership positions is clear from her series of articles. She’s interviewed Washington Post writer Ashley Parker, former CEO of Wedding Way Ilana Stern, director of CODE: Debugging the Gender Gap Robin Hauser, and politicians Pramila Jayapal and Maria Cantwell to name a few. Sophia Maymudes, EPS Class of 2016, and junior at Carleton College, developed crosswords for Eagle Eye for several years, and has continued exploring her passion for writing and publication beyond her time at Eastside Prep. In December of 2018 Sophia had her national crossword publication debut in the New York Times. Her second publication in the New York Times, this time a collaboration, was published in March of 2019.

With a membership of nearly a dozen Upper School students representing grades nine through twelve and several contributing writers in the Middle School, the Eagle Eye team currently delivers a monthly print publication with an accompanying online edition. As the club has grown and the founding members have graduated, one theme has remained constant for the students involved—a sincere interest in learning more about their community and sharing what they’ve learned with others. It’s been a privilege to work with and support this growing and evolving club and I look forward to the stories our members will share at EPS and beyond.