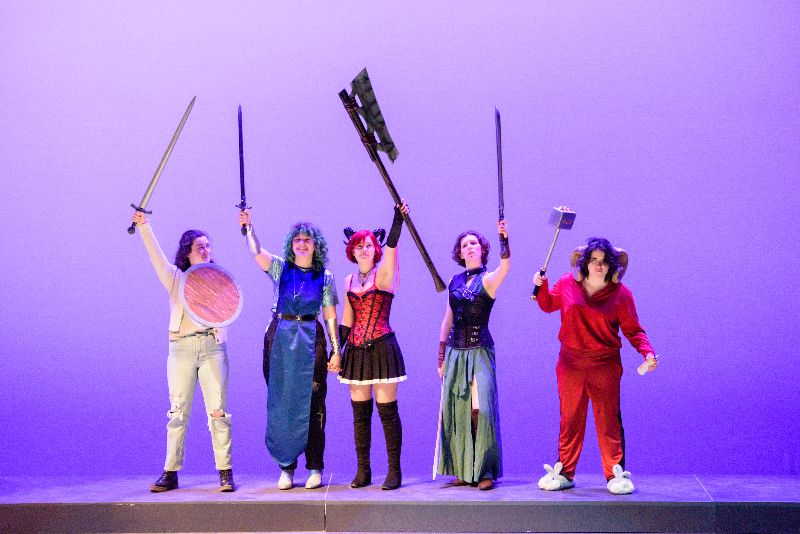 INSIGHT: Theatre is Back!

By Ginger Ellingson, Director of Fine and Performing Arts

As the theatre lights came up on the opening night performance of She Kills Monsters, the EPS performing arts community eagerly awaited the culminating step of the artistic process—the audience response. It was the first such gathering in the Upper School since the “before times” and this show was unlike any show previously produced at EPS. Dragons, sword fighting, comedy, tragedy, strong language, and innuendo! She Kills Monsters pushed the boundaries in content, language, and physical feats. Yet it was a story that needed to be told and was received with heartfelt enthusiasm, belly laughter, and tears.

As Rick McKenzie has wisely mused, “It’s only a little bit of a stretch to say that theatres are a bit like cathedrals: we assemble in them to be guided by a question or a story.” Storytelling is how we construct identity and relate to the world around us. Stories have the power to normalize or ostracize, to build community or break it down. She Kills Monsters was selected to achieve the former. This is the first time the EPS stage featured a queer character and the first time we told a love story that isn’t heterosexual or normative.

We will no doubt feature classic stories again, but in Qui Nugyen’s story of Tilly Evans and her sister Agnus, we featured a story in which some of our students were able to see important parts of themselves reflected on stage for the first time and in a meaningful way. A parent of one such audience member wrote: “Thank you. Deeply. It meant the world for them to see themselves in those beautiful moments.”

In his program notes, Director Ian Duncan offered his framing of the production, “This story is about a world that was struggling to embrace those who found refuge in the margins of society….This is most importantly a story about the audacity of seeking community in the face of seemingly insurmountable strife.  Look around you in this theatre tonight.  We are back.”  Thank you to the cast, crew, directors, audience, and EPS community—we’re back!