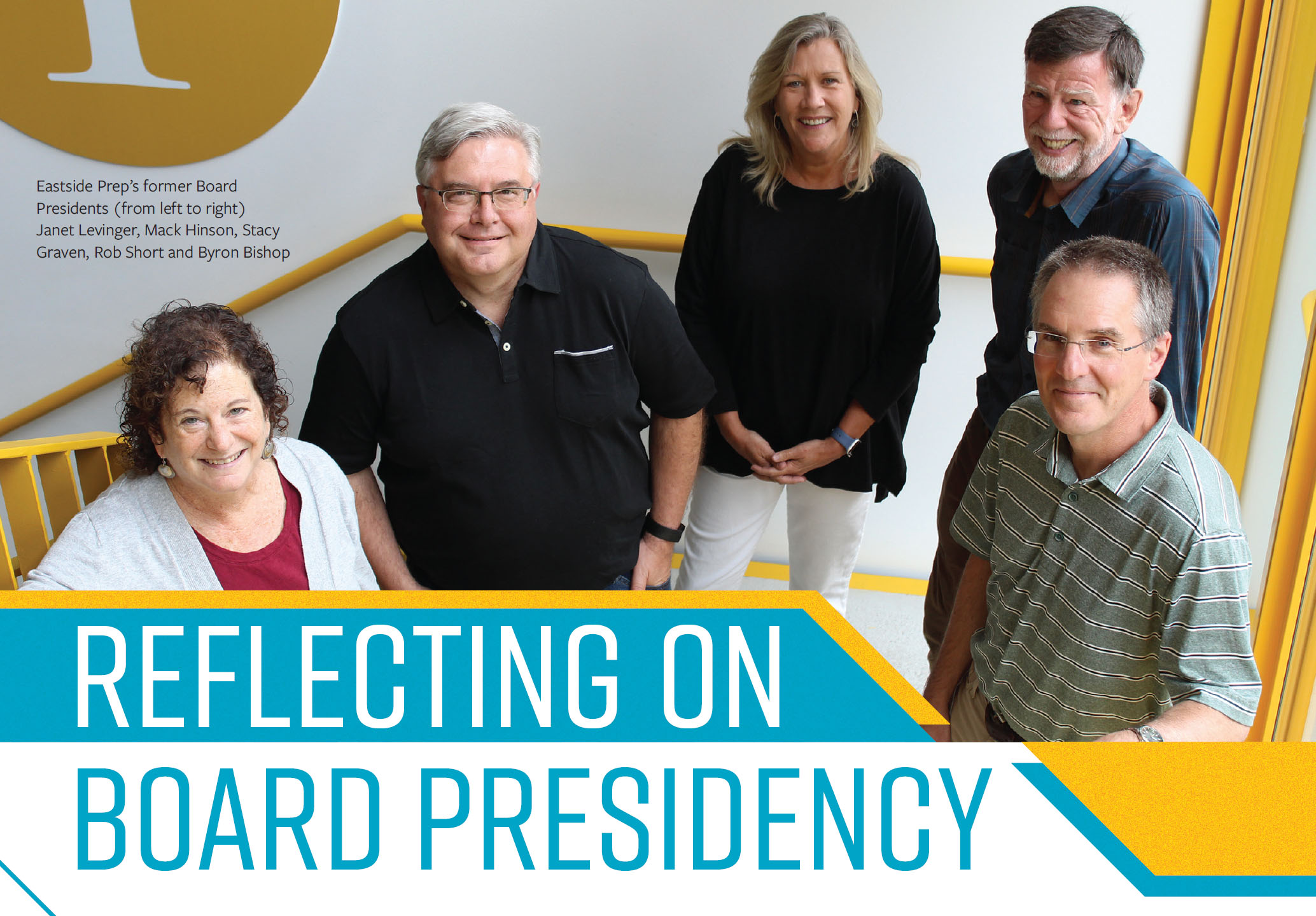 WHAT’S IT LIKE TO BE PRESIDENT OF the Eastside Prep board? A better question might be what’s it NOT like, as the board has both kept up with and led the meteoric growth of this institution. Is there anything the board hasn’t been in charge of? Board presidents have dealt with problems from the philosophical to the mundane. They have acted as educators when hiring consultants from Harvard to study research-based progressive education. They have acted as lawyers and fundraisers as they dealt with financial crises both large (the crash of 2008) and small (the threatened sale of the campus). And in the early days, they even acted as parking lot attendants for our open houses.

Despite diverse challenges, however, important common themes weave through the experiences of all EPS board chairs: They were always ready to try something new, always prepared to fail, always ready to get back up and try the next new thing. They were always adaptable and always careful to respect outside voices. Eastside Prep has been successful because of a willingness to remain true to long-term goals while staying very flexible and agile in the short term.

From the beginning, the job of board president has always involved walking a careful line of daring but responsible growth and innovation. “We knew we had to grow slowly,” said early president Janet Levinger (Board President 2004-2009). Even in the days when every tuition dollar counted, EPS wanted to cultivate a purposeful community, founded on project-based interdisciplinary learning and individualized relationships. “We wanted to be different from the other options out there.”

The only thing consistent about EPS is its inconsistency. “We tried a lot of things all the time,” says Stacy Graven (Board President 2016-2019). “And when they didn’t work, we tried something else.”

Levinger agrees. “I never wanted to hear that we couldn’t do something because we always did it this other way.” As the school evolved, newer presidents maintained that vision. “We always felt a compelling need to keep the framers in mind and to constantly go back to what was their intent,” says Graven, while also explaining that some things diverged from that—like adding sports—as the community grew.

The role of the board has also been consistently evolving. Early board members remember the growing pains of learning how to govern. Dr. Macaluso led training sessions, the largest question always being the difference between governance-level decisions and daily operations. Even on today’s board, it always necessary to remind parents to be board members first. But this is a beautiful problem to have—community members who are invested in so many different ways.

Working with Dr. Macaluso was a highlight of every board president’s time. Sometimes that was easy, often it was challenging, but it was always exciting. Graven has negotiated a lot of contracts in her time, but she says she’s never done anything like negotiating with Dr. Macaluso. “She’s a mighty force!” Others laughed and agreed, all appreciating the power, wisdom, patience, and push that Dr. Macaluso has brought to this school for so long. “She’s a brilliant mind,” continues Graven. “She will protect her staff and students and institution fiercely. People come together and invest in her.”

WORKING WITH DR. MACALUSO WAS A HIGHLIGHT OF EVERY BOARD PRESIDENT’S TIME. SOMETIMES THAT WAS EASY, OFTEN IT WAS CHALLENGING, BUT IT WAS ALWAYS EXCITING.

That none of this would have happened without Dr. Macaluso is something everyone also agrees with. Mack Hinson (Board President 2019-2022) appreciated the genuine partnership between the EPS board president and the Head of School. Graven also appreciates how other school leaders were included in many conversations with the board.  “We shared drafts of statements and everyone was always open to feedback and ideas,” says Hinson. “This isn’t really a traditional board chair-employee relationship. That collaboration is just part of the ethos of the place.”

Hinson remembers talking to Dr. Macaluso about closing the school in advance of the first wave of COVID. He was dragging his feet, but Macaluso was decisive. “It was a stunningly brave decision,” he says. “We were the first school in the country to go remote.” Like many others in our community, he was impressed watching her lead the faculty and staff through that transition, ending with a quality program that kept the students engaged.

EPS has always operated with the knowledge that most decisions are about more than they seem. For example, deciding to pay for lunch for faculty seems like a financial decision, a great employee perk, but then you see the teachers mingling with the students, chatting with them, and realize that you’ve made a big positive impact on the school culture as well. Rob Short (Board President 2012-2016) remembers a time when being a board member and a dad collided a bit. “We built the TMAC building. We had fantastic people on the board. Bob Baldwin didn’t kill the elevator inspector. We started with a plan for a couple of science labs, but it grew into a much more ambitious project with many fits and starts. The energy and motivation around the project was fantastic as was the team’s ability to deal with risk and change. It ended up better than most of us imagined.

“A funny story,” Short remembers. “My daughter (Fina) wanted a gym, but we had prioritized it below science labs. We did have the architect draw up a concept with a gym and used this as a fundraising tool. Fina, having no idea about these conversations, ran for class president saying she’d fight for a gym. It seemed like an inside job, but it  wasn’t.” Okay maybe it wasn’t an inside job in the traditional, corrupt sense, but like a lot of things at EPS, it was an inside job in that everyone in our community feels like an insider, because they all wear so many hats, take on so many roles, and look out for each other.

Byron Bishop (Board President 2009-2012) was president at a time when the board was transitioning from being dependent on “the passionate and generous support of the founding parents to the next generation of families who were less interested in the creation of a new school and more focused on whether EPS was a great school for their  children.” He was proud of the way the board continued to build connections to the community and enlarge parent support. During the financial crisis of 2008, the board faced a lot of tough decisions about the balance of investing in the future and still making their current payroll. “In retrospect we made the right calls, but at the time there were many sleepless nights. And of course, our decisions only turned out to be right because of the way the EPS parents really stepped up to support the school during this difficult time.”

But change and adaptability, while maybe the reasons EPS has flourished, aren’t the bedrock. Board President Mack Hinson put it best: “We are always cognizant that dissenting voices are important.”

That attitude—the open-mindedness of letting everyone’s idea be authentically heard—that’s the secret sauce that makes everything else possible. Without those dissenting voices, you can’t be flexible, because what are you going to flex to if you haven’t heard any other ideas? Dissent leads to innovation. Dissent broadens and strengthens a  community. Dissent is leadership.

When asked what they are most proud of, board presidents can remember some pretty significant moments—bouncing back after the first administrator cleared out her office and left without telling anyone, raising money to quickly buy the office park buildings when the campus was in jeopardy, designing and redesigning, building and rebuilding as the school slowly grew—but Janet Levinger’s answer sums all that up.

What is she most proud of?