The SuperNovas (top left) and the Space-a-Dillas FLL teams

AT EASTSIDE PREP, WE HAVE FOUND SUCCESS IN engaging our students in long-term engineering projects. It’s a great learning experience for students to work together to solve problems and overcome challenges. Our first foray into robotics was in 2013–14. Gunnar Mein, then a parent, volunteered to run an Upper School team in the FIRST Tech Challenge (FTC). With a handful of students and starting a few weeks behind other teams, they produced an impressive robot by the end of the regular season. The following year, Mein was hired to teach a new seventh-grade Botz class in addition to taking over our Upper School programming classes. The subsequent year, Sarah Hollingshead and Nickie Wallace started our Middle School FIRST Lego League (FLL) teams.

Six years in, we now have three Upper School and three Middle School teams. Coach Hollingshead has been joined by coach Katie Dodd and Mein has had assistance from parent volunteers (Chuck Whitmer and Justin Uberti). Two of our three FLL teams went on to the State semifinal round and one of our FTC teams headed to the State finals in February. 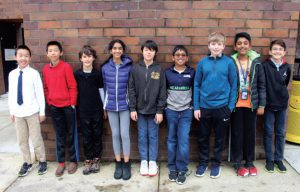 I caught up with the some of the students and coaches to get their take on the season and the rewards of being on the EPS Robotics Team. Coaches Dodd and Hollingshead appreciate the spirit of FIRST Lego League: “Sarah and I are ‘coaches,’ but really we’re mostly just sounding boards and all of the work done by our teams comes entirely from them, from inception to execution.” In particular, coach Dodd was impressed with the students’ ability to receive and use critical feedback from the judges. “Our two teams advancing to the next round spent a lot of time considering how they could improve on their work in the scant few weeks we had between rounds.” Both coaches noted the impressive perseverance of the teams who worked through setbacks. “The team members kept troubleshooting and problem-solving until the very last minute—they never gave up.”

In their final practice, students shared some of their favorite moments from the season and how they operated as a team. The Space-a-dillas (sounds like quesadillas) team cited receiving the Gracious Professionalism Award as their most exciting moment. That award put them in the last slot to the State semifinal round which they thought was out of reach. The SuperNovas cite wining the Core Values award, a first-time win for their team. Regarding teamwork, members of the Supernovas said that this year…“our team was more connected. They are people who I feel like I can be myself around. It is fine to be ‘me’ around my teammates.” Another student noted, “As a new team member, the rest of the team was really inclusive and it was nice to see how they got along.” Our third team, the Space Eagles, showed dedication to working as a team and persevering through challenges.

When asked about the FTC season, coach Mein noted, “The rate of improvement during the season was incredibly high on the two JV teams. Students without any background in FTC robotics were building ambitious and robust designs by the end of the season. The Varsity team showed up in September ready and committed to building a world-class robot, and they have done just that.” Our three Upper School teams this year, NULL, VOID, and Undefined (our students are not without a sense of humor) also worked through problems within their own teams in the same spirit of our Middle School teams. NULL, our Varsity team, came in first in our league and won the interleague tournament, posting the highest score of the season to win the match by ten points.

When asked about their season, team NULL stated that they are most proud of “engineering and building a fully custom robot,” rather than using a kit. Their design, focused on drivability, was the fastest and most maneuverable robot on the court. Creating the base robot early also allowed them to spend more time practicing driving and scoring points in the game. The team estimated that they will have close to 2,000 total person-hours invested in this season—and it shows.

The growth and capabilities of our teams have been wonderful to see. The approach to coaching takes the long view of building capacity in our students to solve difficult problems and the results speak for themselves. Students share stories of being enlightened, excited, and frustrated at different times over the course of a season. Our students were excited to tell the stories both of their successes and of how they overcame adversity. The teams with the most success found that they had to trust and rely on their teammates to succeed. They hashed out arguments and came up with new ideas together. They learned how to plan and set scope on a project, and they learned how to be resilient. Our goal is to engage and empower students to solve problems with the tools available—and our robotics teams are doing exactly that.