For several decades, independent schools—as well as many for-profit organizations—have spent endless hours rehashing their statements of mission and vision. There was a time when every independent school had a mission statement that looked like this:

(SCHOOL) is a co-ed / single-sex prep school serving grades PS-4 / 5-12 / 6-8 / 9-12 in a day school/boarding environment. SCHOOL is committed to developing a diverse community of learners/citizens/students who are responsible for encouraging a global citizenship perspective while focused on the environment/other people/empathy/life-long learning/goodness as an expression of the values maintained at SCHOOL.

It took a while before school people really understood that the mission is not a description. It’s supposed to express something aspirational—something that guides and motivates the members of the community toward a shared purpose. The essence of the school is what should be expressed in the mission. The vision is the result of successfully implementing the mission. To put that in Eastside Prep language:

In order to guide students to create a better world, EPS aims to instill in the members of its community the ability to:

So—why is it the case, at least among independent schools, that schools are easily distinguishable from one another? It’s because each school has a personality—a persona—expressed through the language of mission and vision. Such statements convey what the school most values.

One way to appreciate as well as recognize the importance of a mission statement is to understand the degree to which the language of mission and vision frame the organization’s culture. Among the many thinkers who write and speak about organizational design, Edgar Schein’s voice is one that I particularly value:

It took a while before school people really understood that the mission is not a description. It’s supposed to express something aspirational—something that guides and motivates the members of the community toward a shared purpose.

“In summary, we can think of culture as the accumulated shared learning of a given group, covering behavioral, emotional, and cognitive elements of the group members’ total psychological functioning. For such shared learning to occur, there must be a history of shared experience that, in turn, implies some stability of membership in the group. Given such stability and a shared history, the human need for stability, consistency, and meaning will cause the various shared elements to form into patterns that eventually can be called a culture.” 1

The history of shared experience must start from something. Something must compel the individuals in an organization to repress personal objectives in service to those of the organization. Mission and vision statements enable members of a community or organization to know the values of the whole, thereby enabling each individual to make an informed choice about whether or not to endorse all that the entity stands for.

Whether a student applying for admission or a teacher applying for a position, their first substantive introduction to the school is the mission statement. Critical to anyone’s process on the way to joining the EPS community is understanding the meaning of the mission—to understand the reason the school exists. Implied in the EPS mission is a commitment to thinking. We’re not aiming to produce students who “know a lot of stuff;” we’re not aiming to produce anything—but at the heart of the school is the idea that the capacity to think critically is key to a successful and satisfying life. It’s worth spending a moment on this—because it guides every curricular and logistical decision.

Sometimes people wonder why we don’t offer AP classes. First, AP classes are offered in public schools, so there’s no need to pay independent school tuition if AP is a priority. The primary reason we don’t offer AP is because it flies in the face of our mission. AP classes are survey classes. They aim to cover as much of the waterfront as possible. EPS is interested in the opposite; our program is designed to go deep, to explore fewer concepts and ideas, but to do so in a way that achieves genuine understanding. For students to be able to practice critical thinking, they must be guided to reach for the essence of an idea or set of data points.

Responsible action is “what you choose to do when no one is looking.” Responsible action focuses on ethics. By “ethics,” I mean action within the context of a community. That community could be a family, a school, a country. Ethics refers to the social system that we use cooperatively to maintain the culture. Morality refers to a kind of internal compass that guides the individual to understand what is good and what is not. This is still a part of the social fabric; it defines the personal posture one might adopt.

The organization’s mission, then, should provide enough information to allow the opportunity to “overlay” ones morality on the mission. If there is consistency between the school’s values and those of the individual, there is reason to expect a positive outcome.

With the first two mission points—Think Critically and Act Responsibly—a social construct has been established. The school conveys its values and its expectations for membership at the outset of one’s introduction to EPS.

Finally, Wise Innovation expresses encouragement for experimentation. It calls the members of our community to take risks, to imagine solutions to problems, and to iterate until they meet the objective.

Taken together, the EPS mission inspires seriousness of thought (though not TOO serious), action intended to benefit the whole, leadership that wants to support the community, and a culture that embraces change.

One unusual factor about the EPS mission is that we use it in practical as well as celebratory ways. Each year at graduation, four seniors are honored as worthy representatives of the mission points. This allows us to call out examples among our own community members. It rewards students who have earned recognition, and it holds up as models the behavior that best typifies each mission point. Such a tradition says to the community, “This is who we are!”

In addition, the building constructed to house the fine and performing arts as well as Upper School classrooms is—itself—a practical statement of what we intend the school to be. It is named using the first letter of each mission point—T A L I.

It’s impossible to talk about mission without talking about culture. The mission is our north star—but what we do with it is our culture. 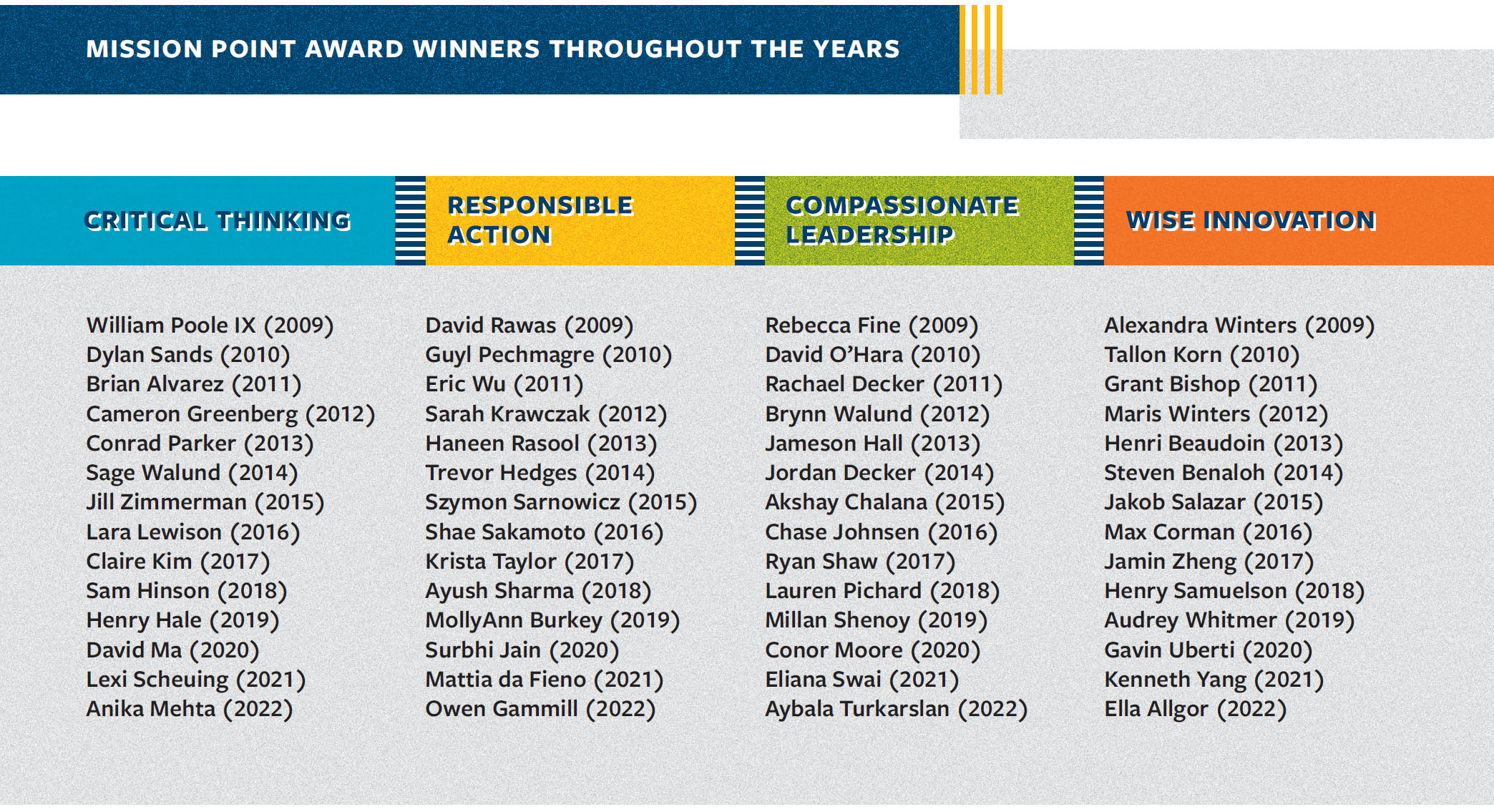 Again, I point to Edgar Schein,

“…we can think of culture as the accumulated shared learning of a given group, covering behavioral, emotional, and cognitive elements of the group members’ total psychological functioning. For such shared learning to occur, there must be a history of shared experience that, in turn, implies some stability of membership in the group. Given such stability and a shared history, the human need for stability, consistency, and meaning will cause the various shared elements to form into patterns that eventually can be called a culture.” 2

Everything depends on two things:

Despite the “love it or leave it” sentiment that may be conveyed in that second point that IS the point. If everyone who visits and researches the school falls in love with it—something is wrong. This is where the mission must be safeguarded at all costs unless there is a fundamental shift in the organization’s environment, or it makes sense for the organization to extinguish itself. The mission is an organization’s constitution; it is the lens through which every decision must be viewed.

“The culture of a group can now be defined as a pattern of shared basic assumptions that was learned by a group as it solved its problems of external adaptation and internal integration, that has worked well enough to be considered valid and, therefore, to be taught to new members as the correct way to perceive, think, and feel in relation to those problems.” 3

The mission is an organization’s constitution; it is the lens through which every decision must be viewed.

The mission of EPS was undertaken in the first place because we perceived a need for families on the east side to have access to secular, independent education that began with the assumption that everyone can be a successful learner—it’s the school’s job to figure out how to make that happen. Quite intentionally, the school began by admitting a neurally diverse student population. We hired a strong and flexible faculty composed of people who liked to learn and were up to the challenge of meeting students where they are as opposed to looking for students who would meet the school where it was. Those two points are as true today as they were twenty years ago; here’s to maintaining the mission for the next twenty years and beyond.