FROM THE OXFORD ENGLISH DICTIONARY: INTENT (and its forms—intention, intentional, intentionality) can be a verb, a noun, or an adjective. It refers to a specific notion in literary criticism called the intentional fallacy, i.e., the fallacy in the argument that the meaning or value of a work can be defined in terms of the writer’s intention. Intentionality is the sine qua non of a philosophical position called Phenomenology. Without intentionality—there’s no consciousness—and that can be troublesome.

As social discourse becomes increasingly fractured, and truth is judged to be fake, intention may be the last bastion of authentic communication. Sometimes it’s not about what you said; it’s about what you meant. The lament here is that we may be dangerously close to disregarding intention in favor of the hard rules of politico-speak in which a speaker is condemned instantly for using “the wrong term,” and the conversation stops there. Wouldn’t it make more sense to take one more step—to uncover intent—and to allow the verbal interaction to be completed accurately?

Students and their families experience EPS as what it is (has become) at the moment they join the community. And that is was created by myriad intentional decisions made over the seventeen-year life of the school. Another way to think about this is to observe that the intent behind most of the decisions that have gone into the creation of EPS are largely unknown by the majority of people who currently work and go to school at EPS.

The foundational intention in the creation of the school was to develop a program for a neurally diverse population. The old model of looking for “this particular kind of student” was abandoned. The aim was to introduce thinkers and learners of all sorts to one another, and to develop a community in which difference was “the norm.” That intention produced another, i.e., find high energy people who want to work with all kinds of learners—knowing that the mix would complicate an already daunting challenge, which is, teaching, itself.

As social discourse becomes increasingly fractured, and truth is judged to be fake, intention may be the last bastion of authentic communication.

It isn’t an accident that there are AP classes, and other tracking programs/mechanisms in so many schools. It’s much easier to teach a class with like-minded students whose aptitude and performance are roughly equivalent. Special programs fill student minds with content, sometimes enabling them to “skip” the entire freshman year (which is only now being spoken about by colleges because they’re losing money on students who arrive with college credits). Why? Is it really worth “screaming through” a curriculum to get to Theory of Ordinary Differential Equations by the time you’re eleven years old? All this does is teach students to calculate rapidly; they understand virtually nothing. 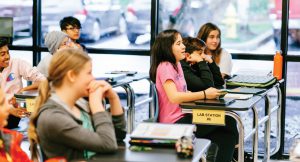 The third intention in the creation of EPS was the cultivation of a positive faculty culture. This is complicated to describe; in a sense you need to be a teacher to understand this dynamic. The teaching profession is unlike anything else people do to earn a living. Teachers are adults who go to work every day. They spend some time interacting with other adults, but the majority of a teacher’s time is spent with students. In the classroom the teacher is in charge of the experience (all of it—seating arrangement, focus of activity, nature of exercises, assessment of quality). Nobody tells a teacher what to do or when to do it. Further, and for the most part, teachers aren’t rebuffed, i.e., students generally do what they’re asked to do.

The complicating factor is that even though it feels to teachers as though they are independent practitioners, they aren’t. They have autonomy in the classroom, but they are connected to other practitioners with the same daily experience. Over time—depending on a host of variables, and because one of the easiest ways for people to unite is in response to a shared threat—the dynamic between teachers and the people who lead and manage the school can become strained. It’s a little bit like a law firm. Some people are partners. Some people are not. Much of what they do is similar; there is a hierarchy of responsibility that gets experienced as power by the people who don’t have the same responsibility as leaders might. 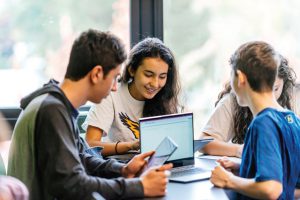 To avoid—or at least keep this kind of fractured dynamic at bay—it takes an extreme level of trust among all the adults in a school. Without it, communication is truncated, the atmosphere is tense, and there isn’t much lightheartedness. Further, the divided adult culture in schools can be felt by the students; it’s easily observable. Just as students sometimes form cliques, the same behavior occurs among adults in workplace environments where it’s safer to establish one’s own group than to trust all of one’s colleagues. A fundamental intention in the creation of EPS was to challenge that stereotype. We wanted to build a team of talented, kind, and articulate educators who understood what it takes to maintain a positive and supportive adult culture. The single greatest reason for faculty turnover is this very culture. It’s not the way it usually is in schools, so not everyone who comes to teach at EPS “gets it.”

The fourth fundamental intention was to build a program and a student culture in which—like the adult culture—students could operate in an atmosphere of trust. It would be naïve to imagine that every student is happy and joyful about being at school every day (basically, a fake fact), but I’ll take this community of students over any other that I’ve known. We have students who trust adults, are accepting of every kind of difference there is, and who enjoy their relationships with peers as well as teachers. (I hope no Upper School students are reading this; it’s a veritable invitation to mutiny.)

Finally, there’s the intention to challenge the stereotype regarding the level of curricular challenge. Somehow, we determined—in the United States, at least—that if kids were happy at school they probably weren’t learning much. But if they were paralyzed by anxiety and felt the crushing pressure to achieve perfection, then they were in an appropriately rigorous (root word—rigor, rigorous, rigormortis) program. We’ve denied that remarkably incorrect notion, and work every day to keep the atmosphere light and the academics solid. Of all the intentions driving the creation of EPS, this is the one most at risk right now. Increasingly, students see themselves competing against a national—even global—array of people who want the same seats in the same colleges everyone else does. That’s another entirely useless assumption.

Much is said about the relationship between intent and impact. Here is where the work begins. Regardless of intention, unless there is serious and committed management of the expression of any intention, the impact is utterly unpredictable. Intention isn’t a one-time option. Intention has to be renewed and revisited constantly if it is to deliver the desired impact. Ideally, intent can be folded in to the culture as originally envisioned; individuals are mortal, but institutions don’t have to be.